Turning the Mind Off
by LM Pruitt

I know, it’s always a little shocking to me, too.

Still, despite the fact I will need to live to be about a hundred and fifty before I finish all the ideas I currently have (not to mention the ones I haven’t thought of yet), every now and then I turn my mind off and just… stop.

Now, what do I do when I’m not doing anything? A lot of the time I’m vegging out on the couch, binge watching Netflix of Hulu or HBO. Currently, I’m making my way through Game of Thrones (again) so expect to see a few offhand comments which seem inspired by the show while reading WICKED and RUIN. After this, I may switch over to Futurama, simply because I like to go back and forth between drama and comedy. Then again, I may shift to House of Cards, because I’m feeling the need for something devious and political.

I also like to crochet. The problem with that is I can’t read the patterns because the abbrivations and terminology make me twitchy. I learned how to crochet from my sister, who was taught by… I actually don’t know. Either way, I can’t read patterns so I wind up watching videos on YouTube and following along. Most of the time that works. Sometimes it doesn’t and then I have to write my own weird pattern interpretation which would probably make for great comedic reading.

I also like to exercise. No, I don’t, but I do it anyway. Diabetes and heart disease and bad knees run in my family and I’d like to put off their inevitable arrival as long as possible. I have a gym membership which I only use occasionally but I do spend a lot of time hiking/speed walking the nature trails in one of the local parks. There’s a good chance I’m going to trip on a root one day and fall and break my nose but at least I won’t have an audience when I do it.

Tell me, what are some of the ways you like to relax and turn off the world? 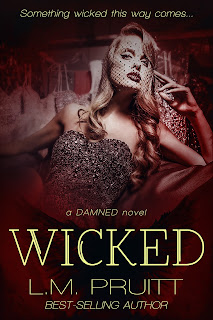 Being a demon isn’t all it’s cracked up to be.

Especially when you make a massive mistake your first month on the job.

Even more so when your sister is one of the all-star players on the other team.

Add in the rumors of not one but two coups and it’s not hard to see—something wicked this way comes….

I’d been wrong.
You could, in fact, be overdressed.
And in my case, I was very, very overdressed.
I tugged on Barry’s sleeve until he leaned down. Pressing my lips to his ear, I whispered, “Remind me to take your advice the next time you offer it.”
Every person in the room, archangel and human/Winged, was wearing jeans and boots. Some wore tank tops, others wore t-shirts or long-sleeved Henleys. Jackets were thrown on a chair in the corner which looked as if it was set there specifically for that purpose. Another corner had been turned in to some sort of nursery area, at least a dozen children of varying ages occupying themselves with toys which were, thankfully, quiet.
One by one, they all turned to look at me and Barry—or really, just me. I doubted Barry was the subject of the intense and blatant interest and scrutiny. I cleared my throat and offered a half-hearted wave. “Hello.”
Joanne looked up from the stack of papers in her lap and sighed. “Julie. Really?”
“What?” I lifted my chin, crossing my arms over my chest and frowning. Maybe it was her more than obvious disappointment, such a perfect mirror of my mother’s, but I was immediately defensive. “What’s wrong with this? I wore this to one of the country club events.”
“Which should have been an indicator that maybe, just maybe, it wasn’t the most suitable thing to wear.” She waved her hand around the room, which, while almost as luxuriously furnished as Barry’s was definitely still a tent. “Is there anything about this place which screams ‘country club’?”
“Or ‘ball’?” A tall, lanky redhead who looked as if he had more questions in life than answers laughed and shook his head. “We don’t have balls here.” He immediately closed his eyes and sighed. “Please, please forget I said that.”
“Don’t worry about it. I’m sure you’ll say something even stupider before the end of this meeting.” Gabriel nodded at me from across the room. “Nice to see you not looking like death warmed over.”
“You’ll have to forgive my brother—he’s recently developed what might be called a morbid sense of humor.” The man who seemed to always be within arms’ reach of Joanne stood, crossing the room and extending his hand. “We’ve met before but I understand you don’t remember me. I’m Michael.”
A vague memory, distorted by alcohol and time, drifted to the forefront of my mind. Ignoring his hand and narrowing my eyes, I said, “You mentioned something about escorting me to hell.”
“To be fair, I was annoyed at the time.” He lifted his brows, nodding pointedly at his still extended hand. “And I don’t think you’re in a position to be commenting on people’s manners given the male company you were keeping at the time.”
“Is there anybody who doesn’t know about David?” I threw my arms up, my voice spiking in annoyance. “Seriously, Joanne? Weren’t you the one who didn’t believe in spreading gossip?”
“There’s a world of difference between gossip and truth, Julie.” Her smile was far from amused. “And you’re being rude to my husband.”
“Wait—I thought the other one was your husband.” I glanced around the room, snapping my fingers and pointing at the man locked in conversation with Gideon. “That one. Raphael.”
“Yes?” He looked up, his eyes unfocused, his confusion obvious. “Did someone say my name?”
“Never mind. Go back to curing cancer.” Joanne waved her hand absently, her attention focused on me. “They’re both my husband.”
“Both of them?” I spun to face Barry, watching the entire scene with no expression whatsoever. “Seriously? Seriously?”

L.M. Pruitt has been reading and writing for as long as she can remember. A native of Florida with a love of New Orleans, she has the uncanny ability to find humor in most things and would probably kill a plastic plant. She knows this because she's killed bamboo. Twice.  She is the author of the Winged series, the Plaisir Coupable series, Jude Magdalyn series, the Moon Rising series, and Taken: A Frankie Post Novel. 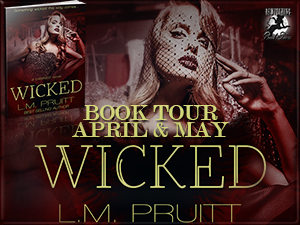