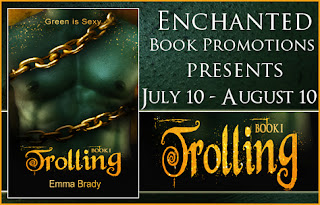 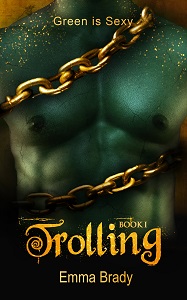 Lily Faye-Richardson thought her bad luck was ending when she and her sisters inherited her uncle's house. Finding a green man chained in the basement changed that. Now she must trust this sexy troll to take her into a magical kingdom and rescue the only family she has.

Theno woke up with missing pieces to his memory but an angel saving him. When her sisters are kidnapped, he is willing to do anything to help her in return. The problem is, if he can't remember who he is, how can he trust himself not to hurt her?
Together, the two of them will go to the land of Tammara to bring back the other Faye girls. They will have to face an Evil Queen, who wants to find the door and cross over into the human world. There is also the matter of an intense sexual attraction between them and the need for Theno to discover his identity. Does a troll get to have a happy ending?

Emma graduated with both an English degree and a library sciences degree. She has always been an avid reader of romance, since she first fell in love with Wuthering Heights.  After college she decided she didn’t want to just read books and started writing them. She has already started in both urban fantasy and historical romance, but doesn’t rule out other projects in the future. Living in Kansas with her tiny lapdog and a couple rambunctious nephews, she spends most of her time reading, writing and enjoying a good cup of coffee.

A gasp caught in her throat at the sight of the massive man being held up by thick metal chains. He was bigger than any man she had ever seen before. Not just tall, although he had to be well over seven feet, but also wide enough to fill the breadth of the room. There was no fat that she could see, just muscle upon muscle. When her eyes traveled down she found he was also stark naked and rather impressive. But it was his skin that kept her from moving any closer.

In the light cast by the flashlight it appeared to glitter both green and gold at the same time. It was hard to tell if it was real or not, but her gut said it seemed real enough. The man's head hung down and his blond hair hid his face from her. Lily could see the steady rise and fall of his chest, but nothing else gave indication of life. The chains seemed sturdy enough to hold him, so Lily scooted forward one baby step at a time.

The voice was deep and scratchy, but unmistakably male. Something in the tone of it hummed through her like a shock. It compelled her to move forward even more, to be within reach of him.

His head hung down and she saw no movement when she spoke. Her skin was beginning to grow warm with a flush she could not explain. Lily wanted to touch him so badly that only her tight grip on the flashlight stopped her.