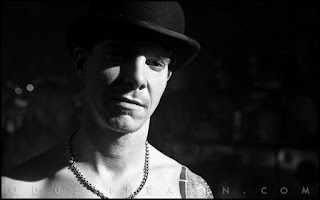 L.G. Metcalf was born in London, Ontario Canada. His father, George, was a history professor and his mother, Johanna, was a retired English teacher and stay-at-home mother. The young Metcalf grew up surrounded by books.  At age seventeen he began compiling notes for longer stories he wanted to write and over the years he amassed a great many notes, many of which were scribbled on odd scraps of paper.

Metcalf is also the lead singer of the rock band Sound And Fury and conceived the idea of The Blue Curtain while sitting in the back of his touring van leaving a gig they had just played in Manchester England.

Both really. I always have an outline. For me this is crucial. I always have various subplots layered in and if I did not have an outline and just went with the flow I would likely end up wasting months of work following plot threads that end up being dead ends because they don't logistically pan out with the other plot threads. Having said that, things do change somewhat as I write and get into the flow and allow my characters to make their own decisions.

Yes. I find it very exciting when I have developed characters to such a degree that they become "real" and start making their own decisions and "telling" me what they will do.

I definitely want to vacation in Hawaii as I enjoy being a beach bum whenever possible.

Yes. My characters travel to many more exciting destinations than I have!

It is called THE BLUE CURTAIN and is available now in audiobook, ebook and print on demand formats. It is my first novel and is the first novel in an epic series called THE WELL OF MANY WORLDS. It is a YA paranormal romance/fantasy. In it I explore love turned to obsession and the concept of true love as a form of immortality. The second book, STARS HIDE YOUR FIRES will be released on Halloween.

That having a fairly detailed outline and plot structure before you start really pays off and does not in any way constrict tapping into the flow of the story. If I or my characters want to change it, I do.

When I was a child my parents read me The Hobbit and the first thing I read on my own was The Lord Of The Rings. They gave me a love of reading. Also my parents were both teachers and had a very extensive library which I explored at length.

It takes an enormous amount of hard work and dedication to write a novel, but hard work does pay off. I highly recommend that you study the art of story structuring before you begin! Truby Writers Studio is an excellent place to start.

This is my first. 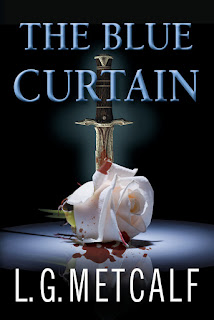 EXTRAORDINARILY SUSPENSEFUL, THE BLUE CURTAIN IS AN EPIC TALE OF LOVE, DESTINY, MAGIC AND SEDUCTION

Devastated by her father’s brutal murder, seventeen-year-old Emily Bliss is determined to find his killers, even after everyone else has given up. As Emily attempts to follow their trail, she encounters a mysterious stranger at a party. Beneath his handsome looks, physical prowess, vast wealth, intimidating presence and hypnotizing eyes, she can sense that he is tormented by demons that she cannot yet fathom.

Soon Emily is shocked yet thrilled to realize that she is falling uncontrollably in love with him to the point of obsession and that she is willing say or do anything to make him stay. But an early birthday gift Emily’s father left for her has revealed secrets about her life, buried centuries ago, that will hurl her into a dark underworld that she never dreamed existed and point to a great destiny awaiting her, if only she can survive long enough to seize it...