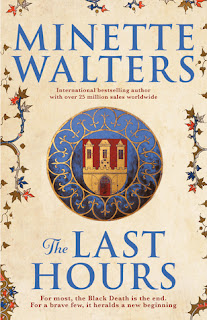 For most, the Black Death is the end. For a brave few, it heralds a new beginning.

When the Black Death enters England through the port of Melcombe in Dorseteshire in June 1348, no one knows what manner of sickness it is or how it spreads and kills so quickly. The Church cites God as the cause, and religious fear grips the people as they come to believe that the plague is a punishment for wickedness.

But Lady Anne of Develish has her own ideas. Educated by nuns, Anne is a rarity among women, being both literate and knowledgeable. With her brutal husband absent from Develish when news of this pestilence reaches her, she takes the decision to look for more sensible ways to protect her people than daily confessions of sin. Well-versed in the importance of isolating the sick from the well, she withdraws her people inside the moat that surrounds her manor house and refuses entry even to her husband.

She makes an enemy of her daughter and her husband's steward by doing so, but her resolve is strengthened by the support of her leading serfs … until food stocks run low and the nerves of all are tested by continued confinement and ignorance of what is happening in the world outside. The people of Develish are alive. But for how long? And what will they discover when the time comes for them to cross the moat?

Compelling and suspenseful, The Last Hours is a riveting tale of human ingenuity and endurance against the worst pandemic known to history. In Lady Anne of Develish - leader, saviour, heretic - Walters has created her most memorable heroine to date.

The book is at its heart a character study during those terrible times when the Black Death arrives at Develish. Lady Anne holds the reins of the manor while her husband is away sorting out his daughter's dowry with a neighbouring lord. When the plague comes, Lady Anne makes the decision of taking their serfs inside the manor's walls and refusing her husband entry when he returns, for she knows how well people can get infected if the sick are placed with them.

Tensions run high, both in Lady Anne's family and the serfs who are beholden to them and they don't know if any of them will survive.

I love that we get some extracts of Lady Anne's journal, so we do indeed get a peek into her thoughts and feelings. I adored her as a character. Her daughter, no so much, she came across as the worst of spoilt brat rich girl.

This was a wonderful book with a terrible subject matter. It's so well-written and flows from one page to the next, it was very difficult to put down. Ms. Walters has created some memorable and realistic characters but still true to their time, even though it might seem weird to us in the twenty-first century.

The historical aspects come to life and you can almost feel the fear of the sickness that is ravaging the land and other nearby neighbours. The history is part of the story, it isn't a history lesson.

The characters are well-drawn, with their own quirks and foibles and sometimes flaws too. No one is a hundred per cent perfect and that's what makes it seem so real. The descriptions are vivid and evocative and you almost feel as if you're there.

An excellent book during one of History's most terrible times. Highly recommended.