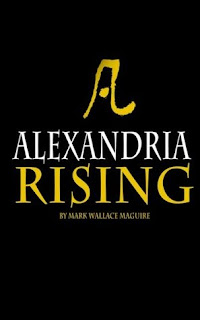 Rand O'Neal, an ambition-less newspaper reporter, is given a single task upon the death of his grandfather: Destroy a mysterious map. What should be a simple errand thrusts Rand into a journey across three countries chased by unknown pursuers into a world he never could have imagined.

The novel has been reviewed as, "Superb," "Amazing" and "Extremely well written" and has drawn comparisons to Dan Brown and Robert Ludlum. The book is labelled an action adventure, but contains elements of science fiction, suspense and mystery. It is also linked to a multi-media website which allows readers to engage with the experience in video, images and interactive appendices.


I wanted to like this book more than I did. The main premise was really interesting - what if all of the Library of Alexandria wasn't lost? What if some of that knowledge was still out there? How would humanity and mankind change?

In this book, this knowledge is out there, but it is guarded by a secret society called The Organization and they are holding that knowledge close for 'the greater good'. Funny how the 'greater good' only seems to help those people who already have what they want.

The book started off so well, with Rand being contacted by a shadowy stranger offering thousands of dollars for his grandfather's old map and in refusing to sell it is on the run from murderous pursuit of that same Organization.

Rand's journey takes him from Ireland and then the Continent where he is finally kidnapped and taken to their main headquarters.

And from there is where it starts to go downhill. Instead of an interesting mystery to solve, and clues to follow, we are suddenly in the villains' lair like James Bond-lite and the remaining half of the book is about Rand trying to escape by pretending to fit in.

Let's not forget that we have a woman scientist, Hope, who seems an interesting character in her own right, but we only get to see her through Rand's eyes as a love interest. Such a waste. One of Rand's first thoughts on meeting her is about her 'perky breasts'. Really? You're running for your life and you notice her breasts? If most men think that on first meeting a woman, it's very disconcerting. The romance between the two of them seemed to come out of nowhere and it felt tacked on rather than part of the same book.

The book was well written and fast paced, but I didn't enjoy it as much as I thought I was going to. I don't mind far-fetched plots or impossible heroes, but I just didn't like Rand and that made reading it tough going, as we only really get Rand's point of view.

Rand knew the killers were after him and he worries they might track him by his mobile phone. That part was fine. But instead of putting the phone in a bin, he swaps it with another passenger at the airport! Well done, Rand, you've just signed that person's death warrant. It's as if Rand doesn't care about anyone other than himself.

An interesting premise let down by poor characterisation.