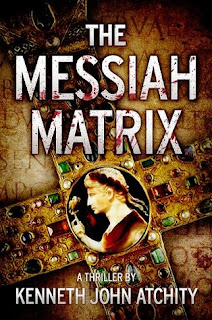 The Messiah Matrix
by Kenneth Atchity
Thriller/Conspiracy
ARC from Netgalley

To what lengths would the Vatican go to suppress the secret origins of its power? Current papal politics has made this thriller eerily prophetic! The Messiah Matrix is a myth-shattering novel whose protagonists delve into the secrets of the past—and expose the fundamentalists who hide them still.

A renowned scholar-monsignor is killed in Rome while a Roman coin is recovered from a wreck off the coast of ancient Judea. It’s up to his young American protégé--a Jesuit priest--and a vivacious, brilliant archaeologist to connect these seemingly disparate events and unravel the tapestry that conceals in plain view the greatest mystery in the ecclesiastical world. Together they pursue their passion for truth—while fighting to control their passion for each other. What they uncover is an ancient Roman imperial stratagem so controversial the Curia fears it could undermine the very foundations of the Roman Catholic faith--much like the secrets emerging from the Vatican in today's news.


My husband still jokes that I do have a fondness for books with a red cross on the cover, anything templar related, I devour. Whle not a red cross, there is a cross on the cover and I love anything where religion or spirituality are part of a secret or a mystery. This book did not disappoint in that regard and it was an intriguiung story.

It's difficult to write this without spoilers and if I attempt to condense the intricate plot, that's what there would be. It starts with the murder of a Vatican Monsignor and has connections to an ancient Roman coin found of the coast of Judea - a coin that seems to show a Roman emperor wearing a crown of thorns. But this coin was cast long before Jesus Christ and the mystery gets started from there. I can't say too much else without spoilers, so I'll leave the plot there.

An imaginitave tale well told with characters you care about. There is just enough detail and description to help the reader visualise things, but not so much so that you are bogged down with descriptions.

The plot is fast-paced without being frantic and there are mysteries and discoveries galore. But as well as the plot there are emotional connections between the characters. It feels like you are accompanying Emily and Father Ryan to find out the truth and you get to feel for them as characters. Any story can fail if you don't connect with the characters and I did feel very attached to them here.

If you like Dan Brown, Boyd Morrison or Scott Mariani books, then I think you'd enjoy this too. An intelligent, well thought-out thriller which raises lots of interesting questions.