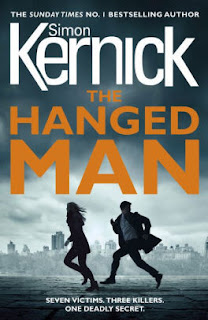 A house deep in the countryside where the remains of seven unidentified women have just been discovered.

A cop ready to risk everything in the hunt for their killers.

A man who has seen the murders and is now on the run in fear of his life.

So begins the race to track down this witness before the killers do.

For Ray Mason and PI Tina Boyd, the road ahead is a dangerous one, with bodies and betrayal at every turn…

I hadn't realised this was part two of Mr. Kendrick's earlier book, The Bone Field. This book was easy enough to follow, and had some handy references to what had gone before. I would however recommend reading them in order as you'll probably get more out of them that way.

I went into the book thinking it was a mystery, but although it is a crime thriller, there isn't really a mystery. It's more of a case the detectives know who the bad guys are but there is no evidence linking them to the crime. The crime being the kidnap, torture, rape and murder of young women which took place in the first book.

I enjoyed the parts with Ray's girlfriend, Tina, who was a private detective and also investigating this same case but from a different angle.

We get various points of view throughout the book, the baddie's lawyer, Hugh Manning, keen to escape from the London crime syndicate as fast as possible, and the book opens with the murder of his wife and his subsequent escape. The main detectives on the case are Ray Mason and Dan Watts. Ray is a maverick (of course he is, will there ever be a detective novel who just has a detective good at their job?) I had been sympathising with Ray at not being able to bring the criminals to justice, but that soured soon after he started abusing suspects and/or witnesses.

The good: the writing and plot is excellent and set at a good pace. Although not a mystery as I was expecting, there is an interesting story here, well told and with fully-fleshed out characters.

The bad: some chapters are from the main bad guy's point of view. I personally did not want to read about how he felt about torturing and raping young women. Ugh, just ugh. I don't think that point of view was needed at all.

If you're looking for a police procedural and are not too bothered about a detective who plays fast and loose with the rules, then you might enjoy this.

I'm not sure enjoy is the right word for me, but it was certainly a gripping thriller and kept my interest.