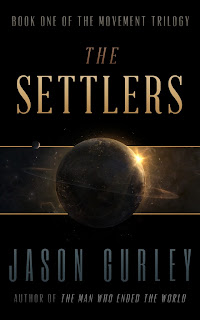 Earth is on the brink of ruin. Great storms destroy cities. Rising seas reshape the continents. Afraid for its survival, mankind constructs a fleet of space stations in orbit, and steps off-world.

Among the humans fighting for their future are Micah Sparrow, a widower who uncovers a plot to return mankind to the dark ages; Tasneem Kyoh, who undergoes life-extension treatments and begins the search for humanity's next home; and David Dewbury, a prodigy who believes he knows where that home might be.

But in space, the rules aren't the only things that have changed. Man himself has changed, and with the Earth in tatters behind him, man turns his attention to the one thing left to destroy: himself.

The Settlers is the explosive first book in Jason Gurley's Movement Trilogy, the epic story of man's small step into space, and the great leaps humanity must make to save its own future.

The first settlers were empty-handed.


They walked up the street like nomads. Fathers with arms around their wives.

Children holding hands, their expressions bleak. The old people followed, pushing their walkers through ankle-deep water. They would be turned back long before they reached the spaceport. But still they followed.

They were survivors already, cast from ruined homes by a tempestuous planet. Their neighborhoods were underwater, or would soon be. The trees they had planted as children were uprooted, and floated like barges through the streets and canals. They had watched their loved ones die, often just beyond their reach.

The first settlers were in a collective state of shock.

Tasneem Kyoh was five years old then. Later she would struggle to remember life before that gray, damp morning. Surely she had formed memories of play dates, of birthdays, of watching cartoons on Saturday mornings -- but as an adult, she could not recall a single one.

It was as if her life began at the moment Earth died. And after that day, she remembers everything.

Nobody knew it would happen so quickly.

For decades, environmentalists and scientists had warned that Earth had a tipping point, an invisible line that, when crossed, would bring irreversible change. Temperatures and sea levels would become unpredictable. Weather systems previously unheard of would surge into historically calm regions. Only a few listened.

Change was too distant. It was too surreal. Filmmakers made movies about the disasters to come, but these failed as warnings. The content of the films were fantastic, unreal. Who could relate to the state of Colorado cracking in half?

Almost nobody. And so, as politicians downplayed the crisis, the coming change became a fiction. A fairy tale.

And for years, it seemed that maybe the scientists had been wrong.

Oh, there were moments: great hurricanes that took unpredictable turns and landed on the wrong coasts. Coastal erosion that took entire resort communities down into the sea almost instantly. Winter storms that threatened traditionally warm climates.

It was hard to string isolated moments together into a warning. But the great ice sheets at both poles collapsed and vanished, and suddenly more cities were built on waterways. These new cities collided with land, were swallowed up by immense waves. Temperatures rose, and the storms attacked mercilessly. The Earth turned on itself.

Humanity just happened to be in the way.

The years that followed challenged mankind in ways it had never imagined.

While people all over the planet were submitted to terrible storms and watched their homes destroyed, rebuilt and destroyed again, world governments worked together to construct man's failsafe: a great home in space, where millions would be able to live free of the daily fear of death and loss.

It took thirty-three years to build the first space station.

In ordinary circumstances, such an undertaking should have been carefully planned and spread over half a century or more. To the average human, however, one who lived in abject fear of abrupt and horrible death, thirty-three years might as well have been ten thousand.

When construction began in 2047, the world's population was nine billion, down from 10.5 billion just three years before. The Earth's unstable season claimed lives in startling numbers, with incredible speed. When Station Ganymede was brought online in 2080, Earth's population was just 4.2 billion.

The new space station would provide a home for 3 million people. Ganymede was humanity's greatest achievement, and it was only a life preserver.

Like to read more? Get your free copy this weekend from amazon | amazon uk