Book Spotlight: Victory of the Divine Queen by Jerome Brooke

Victory of the Divine Queen is a collection of the histories of Orpheus, Lord of the Spring. At the command of Astarte, the Divine Queen, Orpheus leads the Imperial Legions of the Dark Empire into Battle. Other editions of this book appear under the titles Astarte, the Great Queen and Orpheus Victorious. The Queen is also served by Apion, the Beast Man. Apion is the Alpha Male of the Hell Born, who terrorize the subjects of Astarte. Orpheus must war against rebels, while holding in check the horrid forces of the Empire.

The sun rose over the barren hills on the horizon. I rode down the narrow trial towards the sea in the far distance. The path led me to a desert valley. I reined in my horse, seeing a woman riding towards me - with three riders in pursuit of her. I spurred forward towards the riders pursing the lone woman, leveling my lance.


"Cowards!" I cried. My lance caught one of the men as he tried to wheel his horse, causing him to lose his saddle. I rode past the others and drew my sword. One of the raiders closed with me, swinging a mace. I cut under his guard and into his arm.

I rode past the wounded man and traded blows with the third rider. I grasped his reins and cut them with my blade, leaving him helpless. The man spurred his horse, fleeing for his life. He was followed by his comrade. The first man had regained his horse, and also decided to make good his escape. The woman had halted ahead on the trial. She returned and greeted me.

"My Lord, I thank you!" the woman cried. 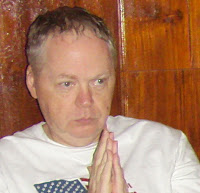 Jerome Brooke lives in the Kingdom of Siam. Jerome is the consort of Jira, a princess of the lost Kingdom of Nan. He is a retired attorney. He has served as City Attorney for Ellettsville, Indiana. He has written The City of the Mirage (Books to Go Now) and many other books.