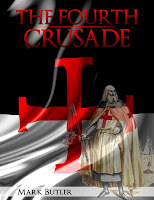 The year is 1202 and the Catholic Church rules the hearts and minds of all Europeans. The leader of the Church, Pope Innocent III, issues a summons to every able bodied man and boy: Take up arms and reclaim Jerusalem from the Muslims. The un-civilized world has been called to wage holy war.

In the streets of Barcelona, Spain, Rayjo de Merafiza is celebrated as a hero of the Third Crusade. His name is known throughout the land. But the peaceful life has never been Rayjo's purpose, and now he must join the Fourth Crusade. His two adolescent sons are also deemed fit for service and they follow their father to war.

Ruggiero is Rayjo's teenage son and his quiet, passive nature puts him on the path to Catholic priesthood. In seminary, Ruggiero is confronted with the horrors of religious fanaticism disguised as holy providence. When he joins his father, his pious teachings are put to the ultimate test.

Juan is Rayjo's younger son and is endowed with his father's violent, unrestrained temper.

As the armies of Christianity gather for the greatest war of their lives, a few powerful men and unfortunate circumstances turn the Europeans away from their intended target and onto Constantinople, the most unlikely of targets. The Orthodox Greeks are forced to furiously defend their homeland.

Set against the backdrop of Europe's tumultuous Dark Ages, Butler weaves the tragic tale of the Fourth Crusade. From the streets of Barcelona to the mighty battles in the East, readers will come to understand how the greatest army in the world assaulted the wrong nation. How Christians slaughtered Christians in the pursuit of money, power and perhaps most important of all...Legacy.

I hadn't known much about the Fourth Crusade before I read this book, but I'd read and seen lots about the Third Crusade, the one with Richard the Lionheart. This book takes place not much later than that but I didn't know a lot about the era. It's a fascinating, absorbing read that doesn't turn into a history lesson, but you do learn some things as you go along, which is how it should be in a fictional account.

Like any novel, the story can stand or fall on its characters and here the author has done a wonderful job. While descriptions are sparse, you are still left with a good sense of time and place. Ruggiero is our main hero and the story is as much about his coming of age as it is about the plot. Concentrating on one character so much helped make the story much more real and engaging.

We go from Ruggiero's childhood to his time at the monastery, to his part in the Crusade, almost like the book is a snapshot of his life. There were some modern ideas and words such as cafeteria for where the monks ate - it should have been refectory - that didn't seem to go quite so well (would Eastern martial arts be known to the Western world then?), but nothing that detracted too much from the book. Although there is some violence in the book, it is not glorified and you can't very well write a book about a crusade without violence, that wouldn't have seemed very realistic. A very enjoyable read.