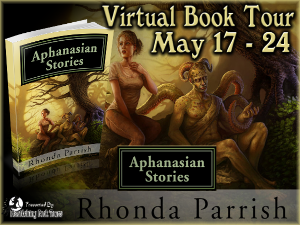 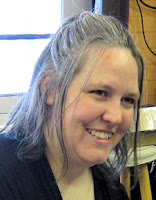 When she isn't procrastinating in one way or another, Rhonda writes. Mostly she writes fantasy and horror, but occasionally something from another genre drips from her pen. She is also the founder and boss-type-lady of Niteblade Magazine.

I don't even know how to outline, to be honest with you. I generally start a story or novel with a character and a 'what if' scenario in my head. Usually I know how it will end but I'm pretty sure I've ever known how I was going to get from the start to the finish. Ever.

Only when I'm lucky ;) Writing always goes better and I find the end result is stronger when the work and/or characters take on a life of their own. That's what I'm always striving to achieve. Sometimes I get lucky.

Not so long ago I would have said sushi, but I recently I've fallen in love with the fish burritos at Mucho Burrito. Om nom nom!

Definitely a night owl. My husband and daughter too. Whenever we have a few days where no one has to work or go to school our schedule inevitably evolves to be very nocturnal. It means none of us are really very happy to get up in the morning (some more than others), but we muddle through.

Everywhere. Seriously. Everywhere. I want to see and experience everything this world has to offer. Not only to enrich my writing, though there is definitely that, but also to enrich my life. We are only given a finite number of days to spend on this planet and I want to pack as much awesomeness into them as I possibly can.

Yes, but I think it might be more accurate to say that different places feature in my books. Most of my stories take place in worlds I've created :)

Sort of. I like to have background noise while I write but generally speaking the emphasis is on the word background. Often I will have the radio in the next room on very low, but occasionally I'll turn on music instead. It has to be soft and, more often than not, it will be instrumental so that the lyrics don't distract me.

Aphanasian Stories is made up of three of my stories which are set in Aphanasia. Two of the tales were ones that were previously published in the traditional way and the third is one I gave away on my blog a chapter at a time. I wanted to increase their audience though and thought bundling them together would be a great way to do that.

When I first started writing I used to use the words then and than interchangeably. I kid you not. Since then I've spent time on both sides of the slush pile, in critique groups and with my nose in tons of books.

Oh, of course. There are always regrets when you look back, right? There are the contracts I never would have signed, the choices I'd change, but looking back and dwelling on that would be enough to make me go crazy LoL Better to keep my eyes front, for the most part, and keep pushing forward toward my goals.

Would it be incredibly trite and clichéd to say everyone and everything? Probably, but it's true. Everything I experience, read, watch, everyone I interact with, overhear in the food court, watch on the bus, they all influence my writing to some degree. Conversation snippets are likely to be twisted and reused in my stories, interesting people become characters, good books make me want to write better, fantastic movies inspire me to create. It's a closed circuit LoL Everything going in effects everything coming out.

Don't give up. Some days are really, really going to suck, but the good days… well, they'll help make up for it and over time you just might find that there are fewer bad days, but only if you don't give up.

I don't think I can pick a favourite book, and I'd be hard pressed to choose a favourite writer either. I love The Last Unicorn by Peter S. Beagle, it may be one of the most perfect fantasy stories ever penned (and if you've only ever watched the movie buy the book. Seriously.) and I love Neverwhere by Neil Gaiman but are they my favourites? I don't know. Code Name Verity by Elizabeth Wein stole a piece of my heart and P.G. Wodehouse will forever have a spot in what's left of it, but I don't know that they are my favourites either. With so many different stories and styles out there to enjoy, I really don't think I can pick one or two to point to and say 'That. That one is my favourite.'

Three of Rhonda Parrish’s beloved Aphanasian stories brought together in one collection for the first time!

A Love Story: Z’thandra, a swamp elf living with the Reptar, discovers a human near the village. When she falls in love with him, she faces the most difficult choice of her life, a decision that will affect the Reptar for generations.

Lost and Found: Xavier, the escaped subject of a madman’s experiments, and Colby, a young lady on a mission to save her brother, must combine their efforts to elude capture and recover the magical artifact that will save Colby’s brother before it’s too late.

Sister Margaret: A vampire hunter and a half-incubus swordsman are hired by a priestess to kill the undead pimp that is extorting, torturing and murdering vulnerable girls.