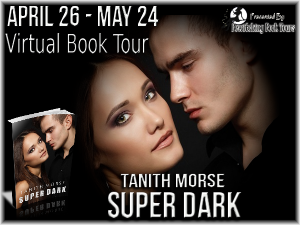 
Hey guys! My name is Tanith Morse and I’m the author of YA trilogy Super Dark, a tale of passion, guilt and redemption. I’ve always been a fan of horror stories and things that go bump in the night. Ever since I was a child, I’ve enjoyed being scared and today I’m going to tell you about my top five favorite horror stories.

1. Gabriel Ernest by H.H Munro – One of the most chilling werewolf stories ever told. It starts with a warning: “There’s a wild beast in your woods…” and quickly descends into a vortex of complete and utter terror. It’s short but extremely well written and the ending is a real corker. Highly recommended.

2. The Monkey’s Paw by WW Jacobs - This 1902 cracker is what inspired Stephen King to write Pet Sematary. In the story, the paw of a dead monkey is a talisman that grants its possessor three wishes, but the wishes come with an enormous price for interfering with fate. Really scary story that makes you think twice about having your wishes granted.

3. Nightmare at 20,000 Feet by Richard Matheson – Great tale that was adapted into a segment for the ‘60s Twilight Zone TV series. It tells the story of a traveling salesman on an airplane who notices a gremlin on the wing and tries to alert the pilot with disastrous consequences. One of the best Matheson short stories.

4. The Veldt by Ray Bradbury – This is more science fiction than horror but the end is so chilling it might as well be. Set in a distant future, The Veldt tells the story of two children who become fascinated with their "nursery", a virtual reality room that is able to connect with them telepathically to reproduce any place they imagine. When the nursery gets stuck on an African setting, with lions in the distance, eating dead carcasses, events take a decidedly sinister turn …

5. The Treasure of Abbot Thomas by M.R. James - James was one of the most prolific short story writers of his generation and The Treasure of Abbot Thomas is one of his best. It tells the story of Rev. Justin Somerton, a scholar of Medieval history who tells a rector the tale of how, while searching a library, he found cues leading him to the hidden treasure of a disgraced abbot. Sadly, the abbot wasn’t a nice person and placed a terrible curse on the treasure. The setting and atmosphere are so spooky, you’ll need to read this with the lights on!

Tanith Morse grew up in Wandsworth, south London. From a young age she developed a great love of horror films and gothic romances. Her favorite director is Tim Burton and her favorite authors include Charlotte Bronte, Stephenie Meyer and Suzanne Collins. When she isn’t writing, Tanith enjoys directing short films for the festival circuit and looking after her cat, Mambo. An avid tea drinker, Tanith can be found hanging out in cozy London cafes in search of new brews to tease her taste buds. Super Dark is her first YA novel.


For fans of Stephenie Meyer comes a chilling love story that will have you hooked from the very first page. Super Dark is a tale of passion, guilt and redemption with a whopping, knock-you-to-your-knees twist!

Darkness stalks seventeen-year-old Sam Harper. Ten years ago on Halloween night, grotesque creatures snatched her best friend Elliot and Sam narrowly escaped with her life. Now a decade on, the police investigation has ground to a halt and Elliot's whereabouts remains a mystery.

Traumatized by her ordeal, Sam finds it hard to make friends. She is mistrustful of authority and changed schools more times than she cares to remember. To her, the world is cruel and unforgiving.

Then she meets the enigmatic Lee Weaver. With his gorgeous face and magnetic presence, he turns heads wherever he goes. Sam has never wanted anyone as much as she wants Lee, but there are things about the alluring stranger that don't add up, leading Sam to ask unsettling questions about her past. Soon she discovers the boy of her dreams is keeping a terrible secret: one that threatens to destroy everything Sam holds dear.

Super Dark is a seductive love story that will keep you guessing right until the final page.