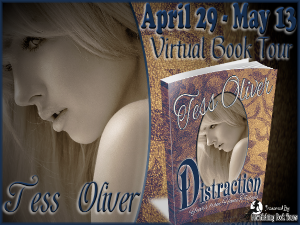 Tess Oliver is a teacher and writer who lives in California with her husband, kids, a small pack of pampered dogs, and the recent addition of three ridiculously cute pygmy goats. She loves horses, chocolate and Jane Austen books. She has a BS of Nutrition Science, and a MA in Curriculum and Instruction. She is also an author published by Barron's Educational Publisher.

I always start out with a plan but somehow things can go awry when I least expect it and often times the story will take on a completely different direction.

Always. It’s almost scary how often it happens. I’ll be writing a scene and a character will veer off from what I had planned. It’s almost as if the character is jumping up and down and saying “that’s not the way I would have handled that situation!”

Chocolate-- milk, dark, white, any kind will do.

I’m usually up before 6 a.m. even on weekends so I’m guess I’m definitely a morning person. Our horses lived in the backyard for years and they had me trained to get up early for feeding time. I love to write in the morning when no one else is awake.

England, but in the nineteenth century. I’m obsessed with Regency and Victorian England. Although, I have a sinking feeling that I would be disappointed with it once I got there. I know it wasn’t all social events and tall men on horseback but attending a Jane Austen book signing would be awesome.

My book Camille and its sequel Heart of the Huntress take place in nineteenth century London and Transylvania, respectively. I love exotic locations and historical periods. The third book in the Years From Home trilogy will take place in fifteenth century England.

Absolutely. I have several custom Pandora stations created with my favorite bands, including Matchbox 20, Everclear, Counting Crows and Pearl Jam. If Eddie Vedder signs it, I listen to it.

Distraction is book one of my Years From Home Trilogy. The heroine, Poppy Seabrooke, is a witch living in seventeenth century Salem. Not a great place for a witch. But the Puritanical witch trials are the least of her problem. Angus Wolfe, a ruthless warlock, has trapped her into promising him her hand in marriage. To try and avoid the horrible marriage, Poppy’s grandmother sends her two hundred years into the future where she lands, literally, at the feet of Cade Tanner, a nineteenth century Montana rancher and hard-edged cowboy.

You can read more about these characters in book 2, Unbreakable, which is available now.

It is very hard to keep up with the trends. When I started, paranormal YA’s were at the top of the chart. Now it’s new adult realistic fiction.

Nope. I’ve enjoyed every minute of my writing career. It’s had big ups, a couple of bestsellers and landing a literary agent and it’s had some downs-- like the occasional bad review and a drop in sales. But it’s been a blast.

I had an awesome mom who made reading and books a center of our lives. We went to the library every week and I always marveled at how fast she could plow through a pile of novels. She was definitely my biggest influence-- with everything, I guess, not just writing.

Write what you love. Don’t try and write a genre that you don’t care for just because it’s the most popular.

Easy-going (oops is that two?) energetic, empathetic. (Was not trying for all e’s, it just happened)

I love Jane Austen but I also adore Barbara Michaels. I guess it’s a tie.

Distraction
by Tess Oliver
Years from Home Trilogy, Book One
Genre: YA Paranormal Romance- mature YA

As false accusations of witchcraft consume Salem Village, eighteen-year-old Poppy Seabrooke, a true witch, is content to stay away from the hysteria and more importantly from the relentless advances of Angus Wolfe, a powerful warlock masquerading as Salem’s pastor.

When Poppy uses her magic to help a young boy, she is arrested. Angus is the only person who can help her, but, in return, she must promise her hand in marriage. In desperation, Poppy’s grandmother sends her two hundred years into the future to hide. Poppy finds herself years from home in the middle of a strange place called Montana where rooms light up without candles or sorcery, steam puffing dragons roar across fields on tracks, and cows sprout horns as long as tree trunks. And while Poppy hides from the man who turns her heart cold as ice, she discovers the man who can set it on fire.

Cade Tanner has always lived fast and hard, and he prefers it that way. The last thing he needs is a girl to distract him from running the cattle ranch his father left him. But Poppy, the sweetly innocent beauty with the soft smile and dark eyes, who seemingly fell from the sky, is tough to ignore. But Cade soon finds that falling for Poppy comes with a dangerous price.

Camille, Heart of the Huntress, Distraction, Unbreakable and Blackpool Cove are all historical YA paranormals. Safe Landing and Bitterroot Crossing are contemporary YA paranormals. Angel Beach, Cowboy Dark, Home is Where the Heartbreak is and A Little Less Girl are all contemporary YA realistic fiction. Coming in May - Strangely Normal - my first book in the New Adult genre.