Book Spotlight: Beauty of the Beast by Carole Remy 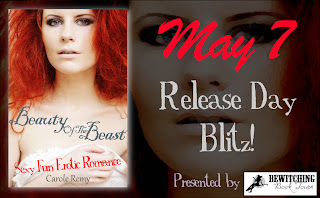 The year is 1950. The town is Austin, Texas. Young reporter Mary Jane Andrews isn’t sure what SM is, but she’s heard that it’s going on outside Austin, and she’s determined to investigate.

Mary Jane Andrews is what Texans call a pistol. She thinks fast, acts faster, and takes the consequences with a laugh. The year is 1950. Young reporter Mary Jane isn’t sure what SM is, but she’s heard that it’s going on outside Austin, and she’s determined to investigate. Once she meets the Master, she’s both enthralled and scared spitless.

What’s a Master to do when his hotter-than-sin sexual soul mate shows up at the door of his highly illegal sex house? Don’t worry, he has lots of ideas...

Trouble is, Mary Jane wants the story. And the Master won’t spend the rest of his natural life in jail. The sex is explosive, inventive, and addictive, both ways. Will it be bend or break for the insatiable Beauty and the masterful Beast?

The question came between pants. What a lovely compliment. I had thought of one more torment before I put the man out of his misery. With a quick kiss on the lips, I left him panting and went to get the jug of water. He looked wary as I approached, so I reassured him.

"I'm not going to pour it on you, Mr. X. That would be mean." I fished out a couple of ice cubes and rolled them around in my mouth. George groaned. I guess he'd read the same book of erotica that I had.

"Mary Jane, don't. I know what you're thinking, but you don't want to do this."

I enjoyed listening to his begging as I sucked the ice cubes and smiled. My mouth was starting to hurt, it was so cold. I figured I was about ready. I knelt down in front of George's penis, and took his balls firmly in one hand. He was still trying to talk me out of what I was about to do, but I wasn't listening. I took the base of his penis in my other hand in a tight grip. He had stopped arguing. I spat out the last of the ice cubes and plunged his penis as far as I could into my mouth.

Now I can't tell you exactly what it felt like, since I've never experienced it, but George went nuts. I sucked as hard as I could, and massaged his balls, and stroked the bottom of his penis, keeping my grip tight. He yelled for a while, then went quiet. And all the while his penis grew and grew, stretching my lips and massaging the roof of my mouth. Soon he was yelling again. And then he exploded in my mouth, the hot nutritious fluid jetting down my throat.

George started a different litany, how wonderful I was, how amazing I was, how he loved me more than the moon and the stars. I drank it all in as I'd swallowed his life fluids a moment before. He stood bound in the stocks, and I sat with my arms wrapped around his legs. Eventually we both calmed down, and I got up to release him from the restraints. I got the bar off his wrists easily enough, and he pulled me into his arms and held me and rocked me while he whispered beautiful promises in my ear.

Eventually I remembered that his ankles were still bound. He told me which drawer the key was in, and I brought it back to him. He unlocked the cuffs and shook his legs to get the circulation going. Then he pulled me back into his arms and we stood, rocking back and forth and holding on for dear life.

Carole Remy lives in Mexico with her beloved dog Gemma. When she isn’t writing and touring her novels, you can find her rescuing dogs, learning wood sculpture, and salsa dancing!