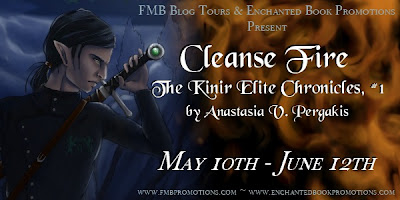 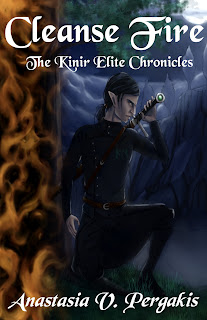 Complete the mission, no matter what…

Captain Derac Vidor has served Kinir for nearly twenty years. It’s his life, his blood. And then his Commander betrays everything Derac holds dear. Now he has to focus on his own life and his team instead of saving the citizens of Kinir.

Treason is only the beginning…

Fueled by rage, the team chases the source to their Commander’s betrayal – a powerful wizard bent on revenge. The wizard seeks to destroy the Kinir Elite, in both mind and body. No place is safe, even among their allies.

The past holds the key…

Derac’s tragic past may be the key to saving the team. But can he face the gruesome nightmare in time?

Excerpt:
A groan escaped him as he unbuttoned his shredded tunic. His hand brushed over the crest of Kinir embroidered on the front. Two lions reared up on their hind legs, one of each side of a crown atop a letter ‘K’. Silver and green threads woven together to create a metallic green look. His fingertips felt each thread, each rise in the design. How could Palto betray us?

A ragged sigh left his lips and he tossed the uniform to the floor. He wiped the dirt and grime off his skin with a soft cloth. The water turned brown. Dried blood flaked off him and landed to float on the surface of the murky water. He couldn’t take his eyes away from the bowl. The liquid swirled, making his stomach churn.

Derac’s knees collapsed from under him and he landed hard on the floor. He dragged the cloth down his face in an attempt to wash the mines and everything from his memory. Nothing helped. When he closed his eyes he saw the tortured and starved faeries and Kie panicking in the dark.

He scrambled to his feet and dumped the murky water out the window. Full of clean water again, Derac plunged his face into it. Using the pitcher, he poured more water over his head. The dirt, he had to be rid of it. All of it.

Derac straightened and squeezed the excess water from his hair. Dried blood, chunks of dirt, and who knew what else turned the water to a thick mud. He threw the contents out the window again and wiped the bowl clean.

He yanked his brush from his pack and raked it through his black tresses. Tears stung his eyes. He told himself it was the tangles in his hair but it was a lie. How many faeries had died before the team could rescue them? How many lost their innocence at the hands of a dwarf?

Derac fell to his knees and bowed his head toward the open window. Moonlight poured in, but it did little to dispel the chill he felt in his bones.

Kie willingly entered the place of her childhood nightmares. How did she muster the courage? Why wasn’t she a wreck like him? He pulled on her strength and forced himself back to his feet. Breaking down was not going to help anyone.

Anastasia knew she always wanted to write. She began at a young age, writing those little stories about the apple tree in the yard. Though her love of stories stayed with her through her poetry stage in high school, she didn’t begin writing novels until she was almost an adult. That’s where she found her true passion.

Her characters visit her dreams – and sometimes during the day – to share their stories with her. Anastasia is merely the writer, but the characters are really the storytellers.

Anastasia lives in Columbus, Georgia with her husband, son, and two black labs. She loves designing books and websites during the day, then writing furiously at night.