How practicing law taught me to write better fiction. Oh, that didn't sound right. I ... I OBJECT!
By Tim Stutler

As a lawyer and writer, I sometimes quote this gem from Learned Hand: “Words are chameleons, which reflect the color of their environment.” A fiction writer – any writer really – could live by those words. Learned Hand was not a novelist, but a 20th century lawyer and judge. He also had the best name in the history of either jurisprudence or literature. I’m sorry: that is not open to debate. And according to Wikipedia, “his writings are admired as legal literature.”

I know what you’re thinking: “‘Legal literature?’ That’s an oxymoron.” It’s “rather like American English,” so my anglophile friends tell me, or “Congressional Ethics,” according to my anglophile friends and the rest of humanity (except for a small but vocal plurality of Congress). Bryan Garner, author of Oxford’s Modern American Usage and editor-in-chief of Black’s Law Dictionary, says that if you hold such a view of legal literature, you are wrong ... and right:

Word for word, lawyers are the most highly paid professional writers in the world. But the literary tradition in the profession is probably the worst.

Some regard Garner as the world’s leading authority on legal writing. He’s correct that writing accounts for much of a lawyer’s work. And many lawyers collect handsome fees for that task, even obscene fees. But as the Prophet Garner suggests, some of these highly compensated, highly educated professionals write things like:

It is agreed that no waiver by either party hereto of any breach or default of any of the covenants or agreements herein set forth shall be deemed a waiver as to any subsequent and/or similar breach or default.

If you don’t see anything wrong with this example, there may be a place for you in the bar. No, not that bar; try the one near the courthouse where the frustrated lawyers responsible for such drivel are scribbling on their bourbon-stained napkins after work.

“Now wait a minute!” you shrill. “Are you saying all lawyers are awful writers? Because you promised to tell how practicing law taught you to write good fiction!” Oh. I, uh ... I OBJECT! That misstates my words and assumes facts not in evidence. I never said I write “good” fiction, I said “better” fiction, and ... and ... um ... objection withdrawn.

As my hasty, ill-advised objection illustrates, reflexes can be useful but can also lead to terrible results, in writing as in life. Practicing law has taught me many lessons that serve me well as a fiction writer – too many to discuss in one post. But my objection hints at what I believe is the most important lesson learned: clear writing is not possible without clear thinking.

That may seem obvious, but I can’t begin to count how many of times I’ve read an opponent’s brief, and then rushed to my keyboard to dash off a hasty, if snarky, response. My words may be forceful and even eloquent, but before long I find myself flat against the dreaded writer’s block. Why? Because I didn't think through the fallacies of my opponent’s position and – more important – what idea I wanted to express. I had unwittingly followed a time-honored adage about legal strategy:

That saw has been around since at least the start of the last century. Hammering the table may make sense – if that is all a lawyer has left in her arsenal. But unless she’s thought things through, she won’t know whether she could have devised something better. And that’s a problem, because table pounding doesn’t work with a discerning judge or jury. Adams Sherman Hill, a noted law graduate and rhetorician at the time the above adage first surfaced, may have said it best: “To an intelligent reader nothing is more offensive than feeble or obscure thought masquerading in strong language.”

Why do we build our writing on foundations of muddled thought? Because we lack the time or industry to do better. For attorneys versed in legal jargon (English and Latin), it’s sometimes easier to toss around a few res ipsas and caveat emptors than develop the core idea we really want to express. The latter can be laborious and time consuming, so we resort to the more facile former.

Some novelists succumb to that temptation too. Consider what John Irving (The Cider House Rules) said about such writers’ work:

I don’t enjoy novels that are boring exercises in show-off writing with no narrative, no characters, no information.... These are the works of people ... [whose] subject is their technique.... Dickens was never so vain as to imagine that his love or his use of language was particularly special. He could write very prettily when he wanted to, but he never had so little to say that he thought the object of writing was pretty language. The broadest novelists never cared for that kind of original language... The larger, plainer things they are preoccupied with, their obsessions – these will last: the story, the characters, the laughter, and the tears.

So what did practicing law teach me about writing fiction? The quality of the writer’s thought is what counts most -- not the length, beauty, complexity, or number of words used to express that thought. That doesn’t mean a writer (or lawyer) should refrain from elegant expression. It just means this: figure out what you want to say first, say it well, and say no more:

With the courage which only comes of justified self-confidence, he dared to rest his case upon its strongest point, and so avoided that appearance of weakness and uncertainty which comes of a clutter of arguments. Few lawyers are willing to do this; it is the mark of the most distinguished talent. 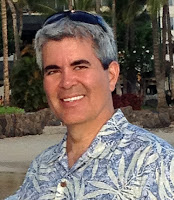 About the Author:   Tim Stutler is a California writer, bicyclist and lawyer. He is currently in the process of publishing his second novel, Hillari's Head (release date: August 1st). Tim's first novel, Dead Hand Control, was published in paperback and dust jacket form in 2003 and as an e-book in 2011. He has contributed to many professional and scholarly publications as a writer and editor. Tim studied at UC Berkeley's Boalt Hall, Harvard Law School, and California State University, Fullerton. He is presently an Assistant United States Attorney, and has served as an administrative law judge, municipal court judge pro tempore, law firm partner, Army Judge Advocate, and fleet sailor. An Ohio native, Tim now lives in San Diego County with his wife and family.   E-mail: authortimstutler@gmail.com Website: http://timstutler.com/ Facebook author page: https://www.facebook.com/authortimstutler?ref=tn_tnmn
Twitter: https://twitter.com/timstutler
Coming Soon From Tim Stutler:

Paralegal Kristina Orris has moved to San Diego seeking a new life – a normal life. She is burdened by the memory of Hillari, a sister with an oversized head and disfigured face. Home-schooled by a protective single father, Kristina herself had a vexing speech impediment and rarely left the house while growing up. But after her dad died, she knew she couldn’t stay. Kristina dreamed of being a lawyer. Pursuing such a goal might prove painful for any cloistered, mumbling orphan; but it would be impossible yoked to Hillari. At 18, Kristina abandoned her home, her past – and Hillari.

Now, eight years later, Kristina meets attorney Gideon “Duck” Ducker, “the single homeliest man she had ever laid eyes on.” But she instantly bonds with the warm, self-effacing lawyer. Kristina takes a paralegal job at Duck’s law firm, where the two are thrown into the most tumultuous and fascinating case of their lives. Everything is coming together nicely for Kristina. Only one thing prevents her from becoming the confident, fulfilled woman she longs to be: the swelling burden of guilt and shame over her past. But is it too late to redeem herself?

Alternately touching, humorous and heart wrenching, Hillari’s Head is about family, intimacy, resilience and, ultimately, acceptance. With its intriguing characters and elements of comedy and tragedy, Hillari's Head will appeal to fans of Nora Ephron (Heartburn) and John Irving (A Prayer For Owen Meany).