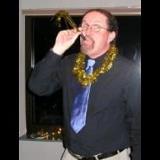 Jim Musgrave is the author of six novels and three collections of short fiction. He is also the owner of English Majors Reviewers and Editors, LLC in San Diego. He's a college professor married to Ellen. He's been short-listed a few times in literary competitions but, as yet, no cigar.


It depends on the genre. With literary types of novels, I let it flow along with the characters and their "needs." With a genre book, such as a mystery, I work with an outline.

Yes, but I must keep them subservient to the needs of other characters. I never know which character will appeal to which reader, so I have to give them equal time as much as possible.

It depends upon when "the spirit moves me."

England because half of me is from the islands.

Yes, if the setting is distant, such as Russia.

Yes, I listen to classical.

My literary novel is about an African-American and gay music promoter who finds out his mother is one of the famous Brighton United Siamese Twins, the Hiltons. Although he's 31, this is a coming-of-age novel, as he attempts to contact his mother, Daisy, and resurrect her musical career along with sister, Violet. Trouble is, it's 1968, and they are 60, and the gig is the 1968 Democratic Convention in Chicago. The Counterculture meets the forces of the State, and the violence prevails, but mother and son have a nice reunion.

Oy vey! I suppose since I published my first "big publisher" book in 1996, I have learned that being an independent author gives me the control over content that I have also wanted. Also, whether big publisher or indie, the reader is still the king! Write a good book and it will sell. Simple formula, eh what?

Putting my posterior in the chair and doing it until my fingers are numb. In other words, I continued because people told me I had talent, but practice was the ingredient to achieve moderate perfection.

Get people who've been down the publishing road before to mentor you. I would prefer fellow authors, but anybody who has been in publishing and/or agenting could suffice. Practice makes perfect.

My new Pat O'Malley Mystery, "Forevermore," will be sold as an audio book the beginning of April, 2013. Shandon Loring (a real live Irish man!) will be reading, and I am very pleased with his voice!

Better to giveth the link: http://www.contempinstruct.com/books/books.htm

My most recent books have web sites: http://www.contempinstruct.com/Forevermore/