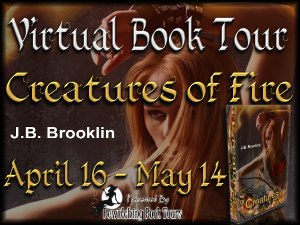 She is a half demon, oblivious to her true nature.

He is a demon set out to avenge murder.

Together they are hunted by the one person she thought she could trust.

Separate they may be able to save each others lives.

“Creatures of Fire” a tale about power, ambition, responsibility and trust.

New York – Paris – Dschinnanya (the world of the demons)

Creatures of Fire is contemporary fantasy that draws the reader into the modern world of Paris and New York and the ancient world of the demons - Dschinnanya. Mysterious characters, a good dose of humor and a dash of romance are the ingredients of this story.

It shouldn’t have happened. It was supposed to be impossible. And still, she had seen him, although he was invisible to the eyes of humans.

“Are you a friend of my uncle?” Her question confirmed his suspicion. With a smile he turned to face her. At the same moment he made sure that the people around them could see him. It would be strange if they noticed her talking to thin air.

“Yes, but I haven’t met him in a long time. Which is probably why you do not know me.” He offered a short bow. “May I introduce myself? My name is Alexander. And you must be his lovely niece, Sariel.”

“Enchanté.” He released her hand with an inner curse. He had no idea what had possessed him to give her a kiss on the hand. Hell! These courtesies had been out of fashion for several decades. And why had he responded in French?

“You are French?” He had drawn her interest with his unusual behaviour. It was the first time in years that he had talked to a human being. Clearly he was out of practise.

“I am sorry, but I must beg you to excuse me. I have business to attend to with your uncle.” With this rude remark he turned and vanished into the crowd.

Without paying attention to where he was going he found himself in a room, or rather a sanctuary, which offered respite from the crowded terrace where he had met Sariel.

Sariel. A name out of a fairy tale. And the woman was absolutely... Girl, he corrected himself silently. She was just a girl. Not older than seventeen or eighteen. Whereas he was more than one hundred years old. His interest in her was ridiculous.

With a wry smile he directed his attention to the treasures that surrounded him. The walls were covered with masterpieces. All originals from the greatest painters the world had seen. Here, just to his right, he discovered a Picasso study. Next to it, a Chagall. And there...

“The Tizian!“ He spoke the words aloud in his surprise. Madonna with her child and the holy Lukas and Katharina. It was one of the painter’s few large canvases owned by private collectors.

Against his will he was impressed. Harold Baldwin, the man he had come to kill, obviously had impeccable taste when it came to art. Too bad that he was also an unscrupulous human being who had yet to be punished for his crimes. 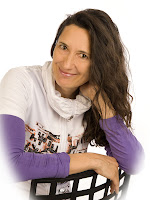 J.B. Brooklin is a German author. Having lived abroad for several years in the US (Oregon, California, Florida, New Jersey), Spain and the Seychelles the writer recently returned to her home country and started writing mystery and fantasy novels.


When she is not writing, her husband, twins and her cat are keeping her busy.

No, unfortunately I don’t plan anything. This can be really difficult because not even I, as the author know, how the story will develop, which twists and turns it will take and how I am going to solve it all in the end :). On the other hand it is really fascinating to just let it flow without knowing where the story will take me.

Hmm. I have a lot of food that I really, really like. But my favorite of all times is pasta. If it was up to me I would eat pasta almost every day.

Neither. I am not someone who enjoys to get up early, but I can’t work until really late at night either. Me, I would love to get up around 10 am and go to bed at around 1 am. That would be the perfect day for me.

I have already travelled quite a lot and visited many places I wanted to see. What I dream about is where I would like to live and that would be Mallorca.

Yes, In “Creatures of Fire” these places are for example New York (as I live in Germany that’s distant for me), but also Paris and the far away world of the demons – Dschinnanya.

No. Music is a distraction for me and when I am writing I am 150% concentrated. But I do listen in between and get a lot of ideas while listening to music.

“Creatures of Fire” is a story about demons and half demons, and people who are willing to do everything in order to gain power.

I have learned that you always should write. Never stop :).

Above all you need to be persistent, stubborn and never let criticism stop you from writing.

I love the Harry Potter books and the way J.K. Rowling draws characters, worlds and crafts an intriguing story.