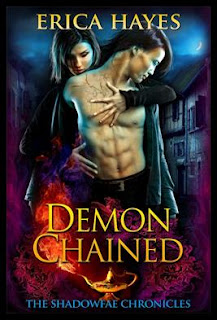 A powerful djinni, enslaved to her lamp. An undead thief, bound to a cruel demon's whim. A passion that will outlast death itself...

A dark, delicious urban fantasy romance from the author of Shadowfae.

Jewel is a djinni of the lamp, an enchanted slave, bound to her owner by dark magical cravings she can't resist. She burns for freedom, and when her lamp is stolen—by Tam, a hot and dirty bad-boy thief—she vows to be rid of her new master at any cost. Even as she plots Tam's demise, the lamp's dark fascination makes her long to claim him as her own.

But the last thing Tam wants is a spellbound djinni who can't say 'no'. Cursed by a demon to suffer living death, he's tormented by undead longing for pain, pleasure, any sensation he can get. To have this exquisite, besotted Jewel at his bidding is pure torture... because Tam refuses to succumb to her magical allure.

Not when he knows she can't truly be attracted to an ever-dying freak. And not when he’s already on a mission from his cruel demon master: capture and deliver one djinni...

The worst thing about being dead? Low blood pressure. Getting a hard-on is just about impossible.

But I've sure as hell got one now. Squeezing a smug murdering asshole's throat between my thighs does it for me every time. I jam my pistol harder into his forehead, banging his blond head into the metal floor, and I can't deny that adds a certain something, too.

Spit leaks in my mouth, thick and tasty, and I savor it. He can't move his arms, and his cool sweat soaks into my jeans. Bitch of a chafe there tonight. I remember to breathe, and the warm nightclub air tastes good, gritty with smoke and fear. "Tell me what you did wrong, bug guts."

My friend Gavain giggles. He's still lounging in the corner, shirt off, dark hair in tangles, blood-tinged fae sweat glistening on muscles stretched tight like wire. Gavain thinks all kinds of weird shit is funny. That's why he helped me lure this dog to his death. But I don't want to think about Gavain right now. I'm having too much fun.

The gangster grits broken teeth, his hair plastering in splashes of his own blood. "Don't know what you're on about."

Bzzt! Wrong answer. First rule of dealing with a reanimated psycho bent on revenge: tell him what he wants to hear.

I squeeze tighter, lean closer. My oily breath wets his face. "You killed me, motherfucker. You blew my goddamn brains out in front of my little girl. I'm still picking out bone splinters. Ringing any bells?"

Vertebrae pop as I twist my neck to show him the hole, black and sticky with rot beneath my long hair. I was going for a haircut that day, too, before the ambush. If they'd waited half an hour, kids would be running from me in the street. As it is, I can pass for living, just, so long as no one gets too close.

He chokes, either the smell or the pressure, and struggles, bare skin sticking on the metal floor. But he can't shift me. Not with the added weight of anticipation. I've waited a long time for this.

"Jesus, Tam, Joey pulled the goddamn trigger, you know that, I never knew he was gonna—"

"Do I look like I give a shit?" My finger jerks tighter on the trigger, and my teeth clamp together, gums crunching. Joey DiLuca's already top of my face-down-in-a-garbage-skip list. This asshole was just easier to catch. Fury dizzies me, and now my dick's so hard, it hurts. "Blood on my little girl's dress. Bits of my brains in her hair, you shit-eating little worm."

I'm trying to be cool and bad-ass, but my vision smears, black blood staining my tears.

Dying's nothing like they say. I remember everything, and I didn't see white light, or my grandmother strumming a harp, or any shit like that. Everything just stops, like you've pulled the plug on a movie projector. Hell's nothing like people say, either, except for one thing: it's full of snot-faced bureaucrats. Deals with demons take time, and I slammed back into my body too late. My daughter's corpse, flowering scarlet in her dead mother's arms, her murderers long gone. I hadn't spoken to my ex for eighteen months, and I wasn't allowed to see Katie, but it didn't mean she wasn't my sunshine.

My enemies kidnapped her to get to me, and when they had me, they killed her anyway, just for spite. She died because I was too slow. I can't bring her back. But I'll make this slick pretty-boy gangbanger regret ever laying his sleazy hands on her.

His chest heaves under my ass as he struggles to breathe. "Jesus, don't shoot. Crazy motherfucker, get off me—"

"Shut the fuck up." I drag his head back, and my fingers smear his hair. His wet blue eyes lock with mine. He sees his death, and pisses himself. I breathe again, and the warm salt tweaks my sluggish sense of smell. Jesus. The stink feels so good, a shudder rips through me, my balls tight and burning. Sensation plays hard to get when you're dead. If I come when I shoot him, I'm not responsible.

Mouth or jugular? I tap my pistol against his teeth, but he squirms and squeezes his lips shut. I trace the barrel down to his throat, where his pulse flutters, and shove it in tight. "See you in hell."

And that's when she walks in, and everything turns to shit.

Erica Hayes was a law student, an air force officer, an editorial assistant and a musician, before finally landing her dream job: fantasy and romance writer.

She hails from Australia, where she drifts from city to city, leaving a trail of chaos behind her. Currently, she's terrorizing the wilds of Northumberland.