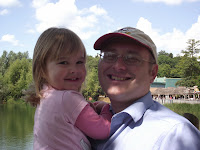 Hi, I’m David Stokes. I’m married with one daughter and a baby boy on the way. I live in Medway in the lovely Kentish countryside, in the UK, although I work full time in London. I’ve recently published my first book, The Cinder Crown, which is available now through Amazon.

Really when I write it's a mixture of the two. For a novel I try to have a good idea of the story structure when I start, roughly knowing what the overall outcomes are going to be, major events, where people are going to end up. Between these highlights however, the book sort of writes itself. Some of the best bits come when I learn what the characters are like and how they would react. For short stories I have to be a bit more disciplined as you have limits on space, so then you have to keep the characters in line!

Yes always! But for me that is the really fun bit about writing (that and talking to people who have read your work). In my mind I am setting up a scenario, creating the people outlines and letting them go to see what happens. Non-writer friend of mine give me odd looks when I tell them that I am sometimes suprised by what my characters do, but it is true. There have been times when characters have acted in such a way that the story has shifted away from where I was planning to take it. The Cinder Crown is full of these, originally I was planning on developing a romance between Elke and Wolfram, but I just could not get Wolfram interested, it just wasn't in his character. However, that doesn't stop Elke thinking he is... (not a spoiler btw, a minor plot element)

Hmm, hard question. I am very adventurous with food and will try almost anything (and have…long story). I guess in the end nothing beats a good old-fashioned roast dinner with family and friends though.

Arrgh. Well naturally a night owl, but with a long commute and children I’m forced to get up really early. On the bright-side the commute does give me time to write.

Everywhere, I want to see it all. There is a whole world and I’ve only seen a small part of it, and it’s not fair. I’d love to go to Asia though, Thialand, China, Japan, but then I’d love to see more of Europe and the US too.

Yes quite often. The Cinder Crown is set in a version of Prussia, and the sequel (which I’m currently re-working) includes Italy and France, but the next one will (possibly) include the Caribbean and even, possibly, somewhere in South or North America… assuming the characters don’t decide to go elsewhere.

Not really. I’d like to but then I’d end up singing along and that would be distracting and just… well painful.

The Cinder Crown is a mixture of historical adventure and fantasy, with a bit of thriller thrown in. It is an attempt to tell the (sort of-) true story of Cinderella. It is set in a fictional country based on 19th century Prussia, and follows a young girl, Cordelia, as she comes to terms with being rescued from an abusive step-family by marrying the crown prince. However Cordelia is suddenly thrust into a new world where she has to cope with plots, and threats, all set against a background of civil disturbance and revolution. The Cinder Crown is the first in a short series exploring a range of issues in this really exciting period.

Loads, so much in fact. I think the main thing that you learn is that writing the book is only the start. Even after the first draft, you then need to re-write and re-work it, then edit it, then edit again, and then get a professional to edit it. Only then can you think about how you are going to publish it.

I would have started trying to build up a following a bit earlier. One of the hardest things is to get people interested in your writing, after all there are so many great books out there to read. I think perhaps I should have written more short stories to build up a name first. Still working on that.

So many great writers have influenced me. I love books, and find it really hard to stick to one genre, so giving a few names really does not do it justice, but people like Terry Pratchett, George RR Martin, Tolkien, Lewis, Kate Mose, Frank Herbert, Manda Scott... really the list is endless. In addition I’ve always been fascinated by history and cultures and they always inspire me to write.

Stick with it. It’s going to be hard. Don’t compare yourself to your favorite writers- no one thinks that their work is good enough, so don't compare it to anyone else. Most of all enjoy it. If you write for the pleasure of creating something it doesn’t matter whether it is successful or not.

Depends who you ask…. Cheerful, inventive, helpful (at least that’s what I’d like to think)

Wow, hard one, the list above gives a few. Actually I’m really enjoying the freedom that ebooks give me to try out new, undiscovered authors (like me) and explore new genres.Ok then, I have to go for Terry Pratchett, the man is a genius!

Sometimes, happily-ever-after is only the beginning of the story...Hohenzern is a kingdom at the peak of its power, respected by its neighbours, and feared by its enemies, rich, stable and ruled over by a powerful aristocracy who live lives of fabulous luxury. It is into this decadent world that the young Cordelia is thrust. Rescued from her abusive step-mother and sisters by the Countess Engless, a mysterious spymaster claiming to be her Godmother, feted and loved by the people as their beloved Cinderella, and married to the handsome and brave Crown-prince Dietrich, it seems that Cordelia can finally put the nightmare of her former life behind her.

And yet not is all as it seems in mighty Hohenzern. Beneath the surface the country is a tinderbox of discontent and resentment, teetering on the edge of bloody revolution. While the poorest people struggle simply to survive under the oppression of the privileged classes, others question the divine right of the aristocracy to rule over them, plotting their violent downfall. Even amongst the royal family powerful forces scheme to overthrow the paranoid and repressive rule of the king, with all sides viewing the beloved Cinderella as an obstacle to their success, an obstacle that needs to be removed.

Written from a series of first-person points of view, The Cinder Crown weaves together the story of a damaged girl propelled from obscurity into fame, wealth and terrible danger, and also the lives and passions of those who seek her downfall. A unique blend of historically-influenced fiction, political thriller, and classic romantic fairytale, this story takes the reader through a world rich in drama and action; a world where each character is both a hero and villain, driven by their principles, dreams, and loves; a journey to the darker side of happily-ever-after.

No others published as yet, though I’m working on that!

My book on Amazon