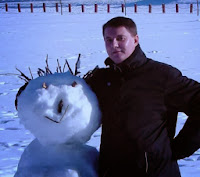 I normally always have the ending of a story in mind, with maybe one or two major events along the way. I think it's best to leave the actual course of events narratively elastic, since you might have an unanticipated and effective idea while writing that will force a change of direction, sometimes a radical one. This has happened to me a few times and it can even subvert a story away from you if the idea is compelling enough.

This has happened to me a couple of times, once in a science fiction novel where my main character became so lost in time and space he seemed to take the story away from me. It was a kind of eerie and satisfying experience, but it led to an ending so enigmatic I'm still not sure about it. The same thing occurred with a recent novel about a corrupt rock journalist where the character actively began dictating his own agenda, so that I actually felt guided writing it rather than entirely in control. It may sound like I'm embroidering here but I had a frightening dream during this where that character was in a tangible way trying to take control of me, and since he was very much a 'dark side' individual it was both sobering and unpleasant.

Lamb served with a kind of fresh mint sauce only an aunt of mine ever made - nothing compares with it in my whole memory of good food I've eaten.

Very definitely nocturnal. I'm at my best when night-writing. Ironically though, my recent London Trilogy was almost exclusively written during morning sessions because that was the only time in the week I could find to write from a fresh start. I would always be too tired after a day's grinding toil and pixel-jockeying (I designed
and formatted and uploaded web content) to write with proper concentration. Night and its quiet and the stillness of well-past-midnight is always the best time for letting the imagination launch itself out fully.

I've always wanted to take a leisurely transcontinental train journey from Grand Central in New York to Union in Los Angeles to watch the full breadth of America go by. My dream is to get one of the trains where you have the observation car at the back with the big Perspex dome on top so you can see the full panorama of the continent as you go.

In most of my books yes, apart from NINE ELMS LANE where my main character violently dislikes anything that isn't London - more specifically those elements of London he believes he dominates and controls. I love the mood of exoticism and the fantastical. Change and adaptation and growth are important themes to me. I myself emigrated to London as a young and impressionable kid of eighteen, and it had an overwhelming effect of the fabulous on me when I first arrived. It also later turned pretty fearsome, forcing me to do a lot of adaptation to survive, and these alternating contrasts have intensely etched themselves into my writing ever since.

No, I find that any kind of distraction diminishes my concentration and the quality of my writing. I've tried doing it for inspiration but I've always found that it's the memory of music and the remembrances I associate with different periods of my life when I've loved or discovered particular artists or composers that has the strongest effects on subsequent writing. I often reference music both past and contemporary in my novels, and particularly in the LONDON TRILOGY books, where certain tracks particularly enthrall the characters. 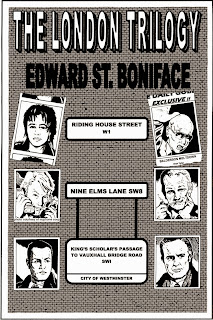 The LONDON TRILOGY is a series of loosely-related novels about three young men who each start out in London in the 1980s, seeking their fortunes in their different ways. The books follow them until they reach an embattled middle age around 2010.

Each character carves out a successful career but along the way they often do ugly things or develop intense rivalries and antagonisms in their efforts to get to the top of their professions. Gradually they become corrupted until their youthful dreams are poisoned or they lose them altogether.

One becomes a pop star, another a vicious gossipy music reporter and the third a principled political journalist. Each of them have to deal with a price of success beyond their capacity to reconcile. I wrote the first novel, about an ambitious young musician called Alderson Lupton, originally just as an experiment to see if I could create an interesting story set only in the present day. This became 'RIDING HOUSE STREET'.

I wanted everything in it to happen only within the constraints of the real world we inhabit, more or less.
Before this I'd largely written only science fiction and fantasy and felt I'd come to an impasse in my writing. I needed to try something new that was a genuine creative challenge. To my surprise I found myself writing my next novel about Alderson Lupton's nemesis Evel Tyler, the corrupt and malevolent rock reporter. Having finished that novel, titled 'NINE ELMS LANE', a third novel suggested itself. This one was about Evel's own nemesis, the principled political journalist Lucas Bellator. Not having planned any of it, 'KING'S SCHOLAR'S PASSAGE TO VAUXHALL BRIDGE ROAD' was where I felt I fully captured all the themes of temptation and transgression and redemption that I'd started out wanting to articulate. I found myself after three years of writing with an unexpected trilogy and by then I decided I had to try my luck at last and put my work out into the marketplace.

Very personally and subjectively, my hope and intention is to find a readership. I've never had any luck with agents or publishers or editors myself. Around 2007, long before I started writing what became the LONDON TRILOGY I made the decision to start a fund to eventually publish myself if my luck didn't change, and indeed it didn't. So what I've learnt most fruitfully is that you have to be willing to sacrifice a bit if you really want to get into print and no one else offers you that initial break. Publishing is a wide field and there are a lot of enlightened publishers and agents and editors out there, but I myself have never been able to strike up a relationship with one.

A lot of writers do, so the publishing world is constantly replenished and the opportunities are there if you are keen enough to hustle for them. No one owns the industry however, so for the determined scribe today there are a lot of different possibilities like self publishing too, which is the option I've gone for. It really depends on your will to get your stuff out there to be read.

No, rather to my surprise things arranged themselves pretty fortuitously. When made redundant early in 2013 I was given a settlement that allowed me to seriously put into motion my self publishing plans. Up until then it had been a remote dream and way too expensive. I found that I could budget to lose the necessary money for self publishing and still keep solvent, so I decided to commit myself to this while I still had the option. I thought very carefully about it beforehand, over several weeks in fact, but I instinctively knew the time had come.

If I'm being unflatteringly honest, what's influenced me most in my writing are the consequences of my own stubbornness and unwillingness to listen. Specifically, the sometimes traumatic but vivid experiences of adversity that came out of this.

When I first emigrated to London it was a reaction against a lot that I felt had gone unjustly wrong in my former life in my native Canada. I was completely unprepared for what being an emigrant meant, and without anything or anyone to fall back on if things went bad. And they did. I went further and to greater extremes than the usual runaway, and I carried that anger in me for a long time, driving me to seek out things I felt I needed to know in an overly enthusiastic and sometimes misguided way. It led me into a lot of angst and soul-searching and frustration and painful mistakes and episodes that in retrospect were crucial for me. They were the way I developed the experiences, good and bad, that I was later to draw on when I found my
literary voice. It's the worst errors and idiocies, I've found, that you write most passionately and honestly and
entertainingly about!

Don't listen to advice, especially from other writers! Each of us has a different voice. Finding it is often an ambiguous and difficult and circuitous process and you have to experiment and occasionally fail before you succeed. Trust your instincts most of all and read voraciously!

Ray Bradbury has the most special place in my heart. Everything he writes has a certain magical quality. When I was a teenager his novels 'FAHRENHEIT 451', 'THE ILLUSTRATED MAN', 'THE MARTIAN CHRONICLES' and short story collections like 'S IS FOR SPACE’ and 'LONG AFTER MIDNIGHT' had a stunning effect on my growing imagination. I could not stop reading him and bought or borrowed everything of his I could find. One of his stories called, I think, 'The Penny'(about the shocking cruelty of
children), was in a reader I remember from elementary school. So I was introduced to him very early on; and I'm eternally grateful for it.

Any places readers can find you on the web