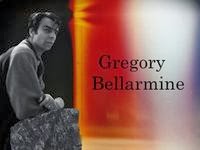 Gregory Bellarmine is the author of the bestselling "Monthly Roman Breviary" and "The Blood That Cries in the Ground," part of "The Father Dante Journals." He considers himself a non-denominational, Didache Christian and lives a happy though sometimes sleepless life in the UK with his wife, two children and rather cheeky Parson Russell Terrier.

For me I try to reveal a story sculpture that already exists inside the stone. I visualise the beginning and the end, then try to understand how the people involved moved from start to finish and discard whatever isn't related to the narrative.

The characters always provide the story through their decisions.

This may seem ridiculous but nothing beats one chocolate square melted on the tongue after a sip of hot tea.

Morning, which suits my wife and Parson Russell Terrier just fine, since he takes over my spot in the bed after I rise.

Iraq - if ever it's safe to travel there that is. I'd love to see the ancient cities along the Tigris and Euphrates rivers where the historical Abraham walked among the most ferocious civilisation in human history, the Assyrians.

Yes and I try to match the music to the emotional centre of the scene, so Marina & the Diamonds might be queued next to Gregorian Chant.

"The Blood That Cries in the Ground" is a dark retelling of the actual history and myths about the Bishop of Myra aka St Nick, when sorcerers ruled Kings. It's less of a What if? and more of a What really happened?

Don't allow the social discomfort of others keep you from exploring subjects that could expand your repertoire.

I "method" write to make the writing authentic, which means that I'm far too inside the mind of certain characters for a prolonged period. Sometimes this isn't the wisest thing to do. Selection of story is thus vital to maintain a sense of balance. A purposefully unpublished novel reflects this experience.

I'd have to say Kafka and post WWII post-holocaust Polish literature. I've developed an innate distrust of anyone zealous about any idea, or who feels intimidation or the Law are legitimate ways to change a person or group's behaviour. For me, new understanding has caused me to change my opinions so many times that I see that 'dogma' can never be applied to a human life. That could change though.

Accept in advance that people will judge you harshly at first but then respect what your determination has wrought. Seek out unique experiences. Become a life-nomad. Write only about what you've witnessed, endured and lived. Nothing beats the truth for providing vivid details that draws me as a reader into your world.

Morley Callaghan's "Such Is My Beloved" is a plain english tale about a depression-era priest who's heartfelt attempt to help the poor merited a backlash from his rather more well-fed parishioners and gold-drenched religious superiors. Although doing the right thing can be excruciating, the emotional reward for courage is always worth it. Really, really. 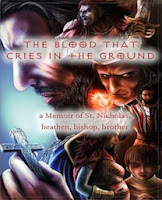 The Greatest Myth Ever Dispelled

Italy. A tough master of novices, Father Dante encounters the bold young priest Antonio who challenges his identity and accuses him of being the Saint Nicholas. But despite the Father faking his death, a determined Antonio discovers a rather alive Dante arrayed in kilt and armor.

In return for Antonio’s silence—and to protect the town from attracting all manner of darkness—Dante agrees to tell his life story. Without explanation, Dante orders Antonio to meet him at night in the abandoned Cathedral, the site of a former battle that the Church has kept secret for a generation.

From the Dark Ages’ when Poet-Sorcerers ruled kings, to the Holy Land when a new civilization was rising, to Revolutionary France where love is lost and gained, Father Dante pursues the one responsible for both his master and his mother’s deaths: Black Peter, his brother.

Academic annotations for "The Practice of the Presence of God," "True Devotion to Mary" and the "Bi-Monthly Roman Breviary" series. This is my first published fiction book.