Book Spotlight: Borealis Shadow of a Man by Maria Hammarblad 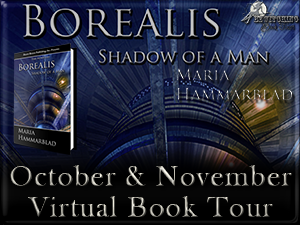 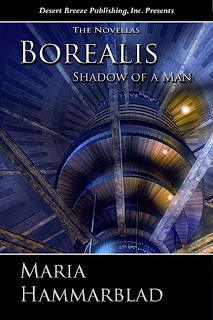 There might be a place Theresa fears more than Borealis, but she can't think of one. The old and decrepit station houses all sorts of cruelty, and to make it better, this is where her husband Dominic was imprisoned, drugged, and tortured. He returned a mere shadow of his old self, scarred by abuse and Uudon withdrawal.

Borealis is the last place Theresa wants to go, and the only one she can't escape. Dominic's apparent madness does nothing to alleviate her fears. Her once sweet husband has turned into a womanizing monster, and will destroy anyone who gets in her way.

Geo, her faithful and all too handsome bodyguard, appears to be the only one on her side. He once helped rescue Dominic, and pays for the insurrection with a lifetime on the run. This might be a situation not even he can handle, and Theresa fears none of them will make it out alive.

Born in Sweden in the early 1970's, Maria showed a large interest for books at an early age. Even before she was able to read or write, she made her mom staple papers together into booklets she filled with drawings of suns and planets. She proudly declared them, "The Sun Book." They were all about the sun. She also claimed, to her mother's horror, that her being on Earth was a big mistake and that her alien family would come and bring her home at any moment. This never happened, but both the interest in space and the passion for bookmaking stayed with her.

As an adult Maria's creativity got an outlet through playing bass in a number of rock bands, and through writing technical manuals and making web pages for various companies and organizations. She did write drafts for a few novels, but the storytelling muse was mostly satisfied through role playing online on Myspace. It was here, while writing stories together with people from around the globe, she stumbled onto Mike. They started talking out of character, and she moved over to Florida to him late 2008. Today the two are married and live in the Tampa Bay area with three rescue dogs.

Borealis XII, to be released by Desert Breeze Publishing November 2013

Find Maria on the web