Shamed for not birthing a child with her wealthy husband, Anna Stewbren can no longer face her family and the disappointment that they wear on their faces daily. After her husband forces her into divorce, Anna travels to town and reads a heartbreaking letter from a wet nurse in Kansas, seeking a mail order bride for the widower she works for. She instantly knows it is the answer to her prayers...

Josephine has a God given gift to nurture the infants of widowers and the wealthy who would rather not feed their own children. Never before has she met a man like Thomas who so deserves a second chance at love. When she pens a letter to a newspaper in Massachusetts, she does so without permission...

Thomas Calhor is a hardworking man, generous to those around him, and a loving father. However, he is broken and lost without his wife, who did not survive childbirth. His reaction to Josephine's letter even surprises himself and begins a journey that will forever change many lives...

Arriving in Kansas brings Anna more challenges than she ever expected to find, but through love, honor, marriage, and a shocking secret that will forever keep her with Thomas proves that in romance, anything can happen...

Eliza Smithren never considered becoming a mail order bride, but after her scheming brother-in-law wants to enlist her in a new business proposition of his, she knows her time has come to leave home once and for all. She doesn't want to be a burden to anyone, including herself.

Edward Thomson sits at the train depot, waiting for his brother's soon-to-be bride to show up. When she does, he's taken back by her beauty. His feelings only start to grow stronger as he spends more time near her, thanks to his brother neglecting his new wife.

Clyde Thomson has secrets deeper than anyone could ever know. Claiming to be a businessman, Clyde soon faces the repercussions of his hidden cheating and gambling debts...

Coming to Kansas was supposed to be the journey of lifetime for Eliza... but as she finds herself falling for Edward, she discovers a secret... and she soon realizes that some debts live on...

A Marriage West
(A Mail Order Romance Novel)
Emma Thoms is no stranger to tragedy. She lost her mother at a young age, and consoled her best friend when she lost her brother in battle. Now after losing her father in a Vermont flood, Emma's insensitive aunt shows up and forces her to Massachusetts to become a mail order bride. Set on not waiting long for the fear of being abused by her aunt, Emma answers the first letter she reads.

Upon arriving in Kansas, Emma's husband-to-be doesn't show. She's then robbed of her money, her faith, and her spirit. On the brink of death herself, she is saved by a kind man with strong hands.

Samuel Calle offers Emma his home while he helps her locate the man she is supposed to marry. But time spent together teaches both Emma and Samuel something - love can happen anywhere, anytime. But with her hand already promised to another man, Emma and Samuel agree to only marry once they know the true fate of Emma's husband-to-be.

Will Emma be swept away by the man who left her to die or will she stay with the generous, caring man that the entire town relies on? This is where love and faith will be put to the test in the newest book in this bestselling western romance series. 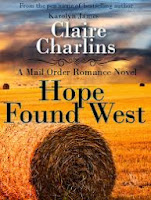 When Margaret Ashaler accepts a marriage proposal from Charles, a local young, rich businessman, she knows without a doubt, that her life will change forever. No longer will she have to worry about her next meal or whether she will have a clean outfit to wear. However, standing in the most expensive wedding dress, Margaret waits, only to realize her husband-to-be won't be arriving. Being jilted was not part of her dream wedding day..

With no choice but to be taken in by her best friend and her best friend's mother, Margaret must find her own path, and fast. She enlists herself to become a mail order bride, and after months of waiting and exchanging letters, she boards a train west.

Daniel Sernla is a strong man with a nice house and a supple farm, but his heart is broken by the murder of his brother in Dodge City. He hopes the arrival of his wife-to-be will ease his aching soul, but it is tougher than it seems.

In a story of love, revenge, and redemption, Daniel must battle the urge to find the man who killed his brother while Margaret tries to become the perfect wife to Daniel... they must find a way to love and trust each other, especially in the face of danger...
___

Claire Charlins is the pen name for Karolyn James -