Guest Post & Giveaway: Reflections of the Gods by Lisa Llamrei

Newly divorced Das MacDermott longs for a fresh start. As he packs up and prepares to move out of the city, he spots a young woman being held at gunpoint by three men. Despite being outnumbered and unarmed, Das does his best to intervene. Once liberated, the victim seems oddly ungrateful, but on an apparent whim decides to join Das in his new life in rural Ontario. Aislinn, as she is called, returns the favour; with her encouragement and support, his start-up photography business takes off, and more importantly, Das is saved from loneliness and self-doubt.

Das, however, is never quite able to fully dismiss the contrary aspects of Aislinn’s nature, and is strictly forbidden from asking about Aislinn’s past. All seems too good to be true, and indeed it is. Aislinn’s unusual talents and odd Behaviour, unbeknownst to Das, come from her demigod status. Aislinn is half-Sidhe, daughter of Fionvarra, Ireland’s fairy king, and a human woman. Sidhe wars have so disrupted the mortal world that Aislinn has joined with other immortals in an effort to permanently separate it from Tir N’a Nog, the fairy realm.

Born in ancient Ireland, Aislinn spends millennia as the plaything of the cruel and narcissistic gods. The pain of being neither human nor Sidhe is offset by her relationship to the Fir Bolg, another race of fair folk who take pity on her lonely state; and the refuge she takes in being Das’s lover and protector. As Das comes to accept the possibility that Aislinn belongs to a supernatural world, he discovers that the two worlds are set to collide in a way that may mean the destruction of all humanity.

I was going to call this The Seven Deadly Sins of Writing, but discovered that title has already been overused (another deadly sin). In any event, this is a list of the things that bother me most as a reader, and that I try my best to avoid as a writer:

Please, just give me the highlights and let me use my imagination to fill in the rest. When the protagonist takes a walk in the woods, I don’t need a detailed description of every leaf and flower. I’ve seen woods before. Really.

Nobody ever looks at herself in the mirror and gives a complete description of her own appearance. Narrators don’t need to do it, either (see Excessive Description). And dialogue such as, “Hey, Bob, you remember that night you were driving drunk and killed that little girl?” Unless Bob has suffered from amnesia since the accident, I’m pretty sure he remembers. Try having two other characters talk about it. Better yet, use a flashback.

Sometimes, it’s important to really know a character’s daily routine in order to truly understand him/her. But, something important to the story has to happen. In every chapter.

The unexplained premonition of danger that turns out to be true? The powerful CEO who has a secret life as a dom? Yawn. Try two happy people who get blindsided by danger, or a powerful CEO with a secret desire to be a submissive. Now, that’s interesting.

This is jumping back-and-forth from one character’s point of view to another. Relentlessly. Using a shifting point of view can be an effective way to tell the story, but the characters have to learn to share. One at a time, please. Otherwise, the reader gets dizzy.

Don’t tell me Jane was angry. Don’t even use the word angry. Show me her facial expression, let me see her stomp her feet, storm from the room. I’ll become more invested in her as a character, and have a stake in how the story unfolds.

When I start reading a new book, I love nothing better than trying to figure out what’s really going on. But here’s the thing: I don’t want to succeed. I want my first guess, and my second, third, and fourth, to be wrong. Nothing is more disappointing than getting to the end, only to discover that I’d figured it all out by the third chapter. 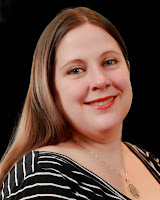 Lisa Llamrei was born in Toronto. She studied languages at York University. At various times, she has been an actor, professional belly dancer and holistic nutritionist. She presently lives in Durham region with her four daughters, and she works at a school of holistic nutrition. Reflection of the Gods is her first novel.

5 Signed copies of the book