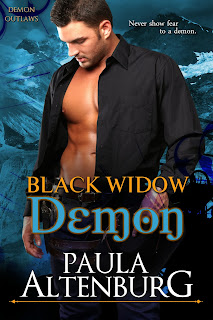 Passionate and headstrong, half-demon Raven is nearly executed on the orders of her fundamentalist stepfather. She escapes from the burning stake using the gifts of her otherworldly heritage and the help of a mortal stranger named Blade. Now she’s set on revenge, and only quiet, intense Blade stands in her way.

A retired assassin weary of the weight of his past, Blade has crossed the desert to seek out a new life. His journey is interrupted when his conscience demands he help Raven find an old friend who can help her. Saving her from her need for revenge and delivering her into the hands of loved ones means he’s one step closer to redemption.

But as Blade’s sense of duty becomes something more and threats, both mortal and immortal, stalk the woman he can’t abandon, he could very well fall back into the life he’s trying so hard to escape.

Tidy towns often concealed dirty secrets. And this small mining town was too tidy for Blade’s liking. It was nothing like he had expected.

Nestled amongst the foothills of the Godseeker Mountains, it suffered from too-uniform construction and a general lack of aesthetic design. But after several months of crossing the desert alone, Blade’s standards were not all that high. He wanted a bath, a hot meal, and a soft bed.

A bed he could wake up in alone. The two-foot goldthief, one of the more dangerous variety of snakes in these parts, he had found in his blankets that morning had been an unwelcome surprise. Fortunately, Blade was neither a restless sleeper nor easily startled and possessed a great deal of natural patience. Once the sun came up on the desert, the well-rested serpent had slithered off on its own without incident.

Blade studied the mining settlement deep in the valley below from the outcropping of weathered sandstone. Layers of desert dirt coated the rooftops, painting the entire town a dull shade of gray. Beyond it, the hills rose to flat peaks of a vast rocky mountain range, sparsely forested with juniper and yellow pine. Narrow ribbons of silvery water streamed down to filter through sand dunes on the valley floor and irrigate the town’s gardens, ones that were now spent and shriveled by this time of year. Behind and above, past the top of the mesa, stretched the desert.

This bold new settlement had sprung up arrogantly close to what had, until recently, been demon territory. It possessed no protective ramparts, something Blade thought a serious oversight on the part of its founders. Demons might be gone, yet the world contained any number of mortal dangers.

When he considered his near-empty pack, however, and that this was the first sign of civilization he’d come across in several weeks, its proximity to evil and its underwhelming neatness was not enough of a deterrent. He did not know for certain what had drawn him back to this land of his youth, anyway. He’d had no particular destination in mind. Perhaps, after more than a decade away, it was time to lay old ghosts to rest.

He patted down his clothing to confirm that his knives were secure and at hand. He doubted if he would be recognized here, or if it would mean much to anyone anymore if he were, but he’d already received his second chance in life and he intended to treat the gift with respect.

A slight breeze stirred the warm, late afternoon air and he made a face—he stank, no doubt about it. If he did not get that bath, he could forget about finding the hot meal and soft bed. Although waking up alone would be guaranteed.

As he turned, he detected movement at the far edge of the town, near the dunes. From this distance it was difficult to say for certain, but it looked as if they were building a very large bonfire. He wondered what they were celebrating.

Shrugging his pack higher on his shoulders, he picked his way off the outcropping. Once on the valley floor, he carefully circled the town to approach via the main street that cut through its heart. It was time to go home. 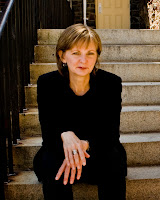 Paula Altenburg lives in rural Nova Scotia, Canada, with her husband and two sons. Once a manager in the aerospace industry, she now enjoys the freedom of working from home and writing fulltime. Paula currently writes paranormal romance and category romance for Entangled Publishing.  Visit her at www.paulaaltenburg.com  and follow her on Twitter @PaulaAltenburg.