Book Spotlight & Giveaway: Touch of the Angel by Rosalie Lario 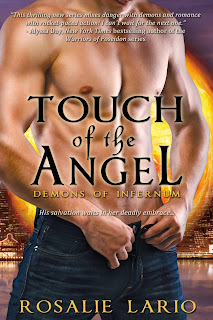 After months of no work, interdimensional bounty hunter Ronin Meyers jumps at the chance to locate an incubus who’s using succubi as murder weapons. Faced with deportation to hellish Infernum if he fails, Ronin will stop at nothing to take out the incubus and anyone else involved. Even the beautiful succubus who stole his heart—and nearly his life—during the most mind-blowing hour of his existence.

Night after night, Amara and her fellow succubi are forced to extract special abilities from the strongest Otherworlders for their psychotic master’s growing collection. When the gorgeous angel-demon hybrid she believed to be dead captures her, Amara is both stunned and elated.

But the happily-ever-after Amara’s dreamed about will have to wait. Before she and Ronin can find salvation, they must bring down the madman hell-bent on destroying everything—and everyone—they love. And Ronin and Amara are at the top of his list.

Rosalie Lario is the award-winning, paranormal romance author of the Demons of Infernum and the Fallen Warriors series. Rosalie double majored in Anthropology and Classics as an undergraduate student, and briefly considered becoming an archaeologist before realizing they don't actually live the life of Indiana Jones. So what was a classical geek armed with a lot of useless knowledge to do? Become a lawyer, of course!

After attending law school in Florida, she practiced real estate law for several years before finally admitting to herself that negotiating contracts wasn't nearly as fun as dreaming up stories. She never imagined all the mythology she'd learned throughout her undergraduate education might actually come in handy, but it makes perfect fodder for the paranormal romance stories she now dreams up.

When not writing, she enjoys spending time with her husband and two young children in their home state of Florida.