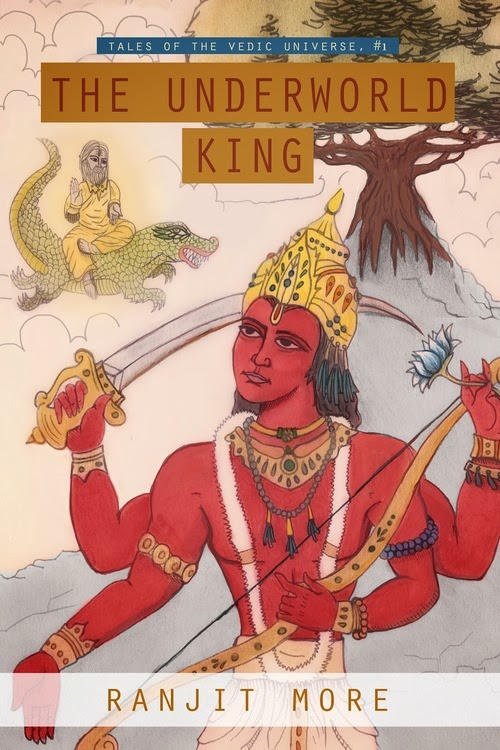 60,000 miles below the surface of the earth thrives a kingdom inhabited by the daityas - giant, fanged beings of the night who sometimes travel to the surface above and eat humans in the hearts of grim forests. Their four-armed king, Drumila, faces a new peril, and this time it is advancing upon him not from the heavens, where his eternal enemies reside; but from the darkest depths of creation. The naagas -giant, flame-breathing serpents- are traveling towards the capital of daityas, intent upon reducing them to ashes, and Drumila must do something about it. For no matter how strongly he detests his subjects' lifestyle and nature, it is his duty to protect them as king.

Moved by Drumila's plight, the powerful sage, Shukracharya, swims down into the underworld upon the back of his giant crocodile and convinces his disciple-king to migrate to the surface of the earth.

What follows is an epic exodus to the world above and a strange encounter with a beautiful girl thereupon. Nandini seems to be human, but all signs point towards her having descended from the heavens, the least of which are a delicate waist and long eyes extending up to her ears. But is this a trick of the gods? Drumila will find out when the battle begins.

THE UNDERWORLD KING is the tale of the emperor of Paataal, the Hindu underworld, and the goddess of Svarg, the Hindu heaven, and their quest for endless power, lust and each other's destruction.


Looking upon the great, wide mouth of the valley, Drumila, the sage and the entire host of western daityas stood by the gushing river. In front of them, a huge procession swelled, resembling a wave of dark limbs decorated with glittering ornaments, only it moved on the soft black sands of the bank rather than the river’s surface. Muya’s party of architects and builders had arrived.

In the front marched a phalanx of warriors, all maharathis[48], for the protection of their ancient king, and in the middle walked a great, golden lion, whose mane touched the black ground beneath him.

Upon that lion rode Muya-asura, who was dark as the night and possessed ten arms. He appeared like a mountain moving amongst the crowd, owing to the sheer size of his torso and arms. In those thick arms, which looked like so many trunks mounted upon his shoulders, he was carrying various heavy articles glinting on the banks extraordinarily, signifying their supernatural make.

There was: a giant hammer made of iron, which looked like it could destroy a mountain in one blow, a carver, a golden rope used for measuring, a huge block of red gemstone which shone like the rising sun in his hand, and many other smaller instruments Drumila couldn’t discern in the crowd.

Behind Muya-sura, walking in an orderly fashion, were his famous builders. Contrary to Drumila’s notion of them, they were built like normal daitya-warriors, with stout arms and wide shoulders. They were carrying a block of white stone each, which made them seem like ants carrying rocks over the distance. Evidently, these architects were used to a lot of heavy lifting. So, even though they didn’t stretch bows or wield heavy clubs, they were as strong as any other daitya.

The party climbed up the mild slope to where Drumila and the others were standing, and the maha-rathis separated into two columns to make way for their king, one fencing the thick forest on the left and the other standing by the river on the right.

Muya rode upon his giant lion, whose heavy paws were lifting the black sand in big measures, and came to a halt in front of Drumila and Shukracharya. His great, round shoulders, along with his ten, black arms adorned with gold, moved to and fro as he alighted from the lion upon the moist soil, much like how the mountain, Mandaar, rotated one way and the other, when it was used for churning the ocean of milk by the devatas and daityas. With steps that made the earth tremble, Muya walked towards them, and came to a halt just a small ways ahead. Then he greeted the sage with a wide smile, showing pearly white teeth and two long fangs, and bowed his mighty torso in front of the sage.

“Maharaj,” he said in a booming voice, which settled all those of his party who were milling about behind him. “Give me your blessings.”

Shukracharya placed his right hand, stick and all, on top of Muya’s head, a wide smile adorning his face.

“Great emperor of the underworld,” he said in a rumbling voice, “may your opulence, strength and powers never dim for as long as you live.”

“Thank you, maharaj,” said Muya with a hearty grin. “Indeed, your words can never be untrue.”

At that moment, the reclusive old yogini, Darshini, pushed forward through the crowd of daityas and stood beside Drumila, as though possessed by some spirit. Her eyes, which were framed by thick, red eyebrows, were widened in a sort of mad veneration. It was from Muya that she’d gained all of her occult knowledge, since he was the master of mayavi-vidya, or sorcery, and it was Muya that she worshiped in her secret residence.

But other than giving her a wry smile, the ancient daitya ignored Darshini completely. Instead he lumbered toward Drumila, two of his dark arms spread wide in front of him, and his face stretched in an uncertain smile.

Drumila stepped up to him at once and embraced the emperor’s hard waist with his lower arms. He could feel every single eye of the daitya gathering trained upon them. ‘And why not?’ he thought. Entwined as the two kings were, they must appear like a mountain of burning, hot coal, with Muya the un-burnt charcoal whereas Drumila its glowing embers.