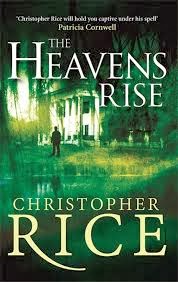 It’s been a decade since the Delongpre family vanished near Bayou Rabineaux, and still no one can explain the events of that dark and sweltering night. No one except Niquette Delongpre, the survivor who ran away from the mangled stretch of guardrail on Highway 22 where the impossible occurred…and kept on running. Who left behind her best friends, Ben and Anthem, to save them from her newfound capacity for destruction…and who alone knows the source of her very bizarre—and very deadly—abilities: an isolated strip of swampland called Elysium.

An accomplished surgeon, Niquette’s father dreamed of transforming the dense acreage surrounded by murky waters into a palatial compound befitting the name his beloved wife gave to it, Elysium: “the final resting place for the heroic and virtuous.” Then, ten years ago, construction workers dug into a long-hidden well, one that snaked down into the deep, black waters of the Louisiana swamp and stirred something that had been there for centuries—a microscopic parasite that perverts the mind and corrupts the body.

Niquette is living proof that things done can’t be undone. Nothing will put her family back together again. And nothing can save her. But as Niquette, Ben, and Anthem uncover the truth of a devastating parasite that has the potential to alter the future of humankind, Niquette grasps the most chilling truths of all: someone else has been infected too. And unlike her, this man is not content to live in the shadows. He is intent to use his newfound powers for one reason only: revenge.


This is the first supernatural type book I've read from Mr. Rice, but I have read and enjoyed his previous thrillers so I thought I would give this one a go as well, since I knew I liked his style of writing.

I'm glad I did, it was a very interesting and engaging tale.

The story begins with extracts from the journals of one of our main characters, even though she is absent from quite a bit of the book. Niquette  was my favourite character and I would have loved to see a bit more of her.

The prose is lush and detailed and you can almost imagine yourself everywhere the author describes, you can feel the heat and humidity of New Orleans, even if like me you've never been there.

Just a personal preference, but I did not like the parts where it was written from Marshall's point of view, it was really disturbing to be in that man's head and I felt like I needed a shower afterwards. I found no redeeming features in him at all, but I suppose that was the point.

The book flits between past and present and it can get a bit confusing as to which era you're in, but gradually the longer you read the more quickly you realise which part is set where.

Like any book, the story will succeed or fail depending on the characters. Here, the characters are very well-written, even the ones like Marshall who make your skin crawl and the side characters like the nurses in the hospital.

A scary and disturbing read sometimes. It's well-plotted with lots of little twists and turns to keep you guessing and despite feeling uncomfortable at some of the scenes, all round it was a very good read.