“There is nothing so evil in the world as what humans can do to one another.” – Edward Scot (Cassie's dad)

The fantasy genre loves larger-than-life heroes, which is probably why we tend to turn to larger-than-life antagonists. Who can stand up to a man with the ability to crush a tree into splinters using only his mind? Not you or me, for sure. So instead we turn to werewolves, vampires, orcs, goblins, and demons, just to name a few.

But for some time I have felt that in the search for evil, we really need look no further than our own backyards. Human beings have an amazing capacity to hurt one another, and many of us even manage to rationalize that it's all for a greater good.

If my hero can crush a tree to splinters using only the power of his mind, then I can give you an anti-hero with the same power. Using that formula, you could say we may as well cancel the magic out and just write about regular people, but where's the fun in that? I do love make believe, or I wouldn't write fantasy. :)

There are serious advantages to writing human anti-heroes, chief among them being that it's rare to find a human who is pure good or pure evil. My kids may like knowing who the good guy is and who the bad guy is at all times, but life isn't like that. When you go beyond demons, you have the opportunity to figure out why the antagonist does what he does in terms that the average reader can understand.

On the flipside, why is your hero basically good? How did a two-year-old with some destructive power learn that he doesn't always get his way? Or did he?

As the fantasy genre matures, the demons themselves are becoming less evil in response to authors' instinctive realization that “BWAHAHA!” is not a great motivation for sowing destruction. Dark heroes are becoming the norm rather than the exception, vampires are simply misunderstood, and shape shifters are getting cuddly.

In Eagle Rock, Missouri, where Cassie Scot makes her home, I opted to create a world of mostly human sorcerers to prey upon one another. And in Secrets and Lies, you'll see some of the worst humanity has to offer. 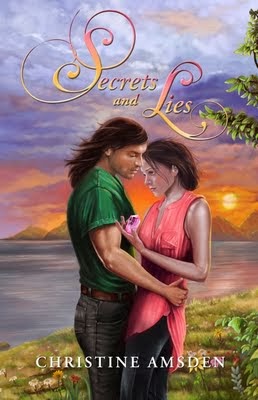 Cassie Scot,still stinging from her parents’ betrayal, wants out of the magical world. But it isn’t letting her go. Her family is falling apart and despite everything, it looks like she may be the only one who can save them.

To complicate matters, Cassie owes Evan her life, making it difficult for her to deny him anything he really wants. And he wants her. Sparks fly when they team up to find two girls missing from summer camp, but long-buried secrets may ruin their hopes for happiness.

Christine Amsden will be giving away a $25 Gift Card to Amazon or Barnes and Noble During This Tour! a Rafflecopter giveaway
at January 12, 2014