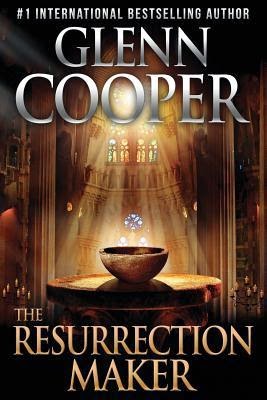 Echoes from the past guide Arthur Malory on a dangerous search for the Holy Grail, a quest that may shed light on the mystery of the resurrection of Christ.

From the thriller writer, Glenn Cooper, whose books have sold five million copies and have been top-ten bestsellers throughout Europe, comes his explosive new thriller, the most innovative and controversial book ever written on the Holy Grail and the resurrection of Christ. Arthur Malory, a seemingly ordinary Englishman, has a burning interest in the Grail, a passion inherited from his father. Thrust into a life-or-death quest to find the precious artifact, he will discover not only his own amazing heritage but the power that the Grail possesses, a power that informs the resurrection of Christ and explosively merges spiritual and scientific thought.

Arthur Malory doesn't just share Thomas Malory's surname, he is also his descendant, and like his ancestor, Arthur too has a fascination with the Holy Grail.

A chemist, who works at a physicist company in Basingstoke, Arthur is also a member of a loose society of friends who also have an interest in the Grail and they call themselves the Grail Loons.

After witnessing one of the Loons' murder and almost dying himself, Arthur is set on the path to find the Grail and finish his mentor's legacy. But Arthur isn't the only person searching for the Grail and some of them have no qualms about killing to get what they want.

Like most of Mr. Cooper's other books, the tale takes the reader from the present day to various other points in history from the Big Bang, to the time of Christ, the time of Arthur and his knights, to 1800s Barcelona and Gaudi, to the time of Thomas Malory as he writes his opus, the Morte D'Arthur. Each section blended well with the whole as you try and connect the dots and you feel as if you are on the quest with Arthur.

It was an engaging, entertaining read and I adored Arthur. He was an ordinary man put on a path to find something extraordinary and he was noble and pure of heart, as someone who would go looking for the Grail is supposed to be.

It had romance, adventure, a great plot with an interesting melding of science and faith. The book ends on a cliffhanger and at first I was disappointed at that. But as I thought about it a bit more, that was really the only ending the book could have. That ending fit the book perfectly.

I have a wee niggle, which I often do with books set in Britain with mainly British characters, but then the spelling and idioms used are American. It's jarring to me and does take me out of the story somewhat.

Still, all in all a fascinating read.