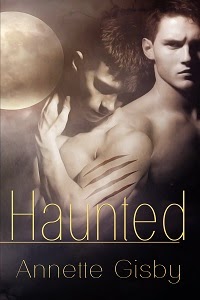 With the kingdom almost brought to its knees by magic during the Mage Wars, all those with power have had it stripped from them. Once a proud mage, Lord Keston makes his living tutoring the king's son.

Disgraced after being caught with another man; Lord Kestan is dismissed from the king's service and sent to the country to tutor a minor duke's son.

The duke's home, Gruhall Abbey is reputed to be haunted. But what Kestan finds there is someting much stranger and much more intriguing...

"The master wants to see you in his study," said Rorgil, his words indistinct through his overly prominent front teeth. "He only ever sees people in his study when he gives them their marching orders."

Kestan didn't reply, in all truth the man was probably right. He followed the rat-like man down the winding staff staircases; staff weren't allowed to use the sweeping marble stairs that led up from the ground floor to each wing of the palace. The staff stairs were narrow and dark, with nary a window on any of the small landings. By the time they reached the back hall Kestan was accepting of his fate. It would be hard to get another position without a good reference, but it could be done. He was still alive and looked to be that way for the foreseeable future.

Rorgil led him out into another hallway, this one panelled in oak that had darkened over the years, with former Varathorn ancestors glancing down their noses at everyone who passed beneath their gilded picture frames. Rorgil stopped at a heavy oak door and tapped on it twice with a white-gloved hand.

Kestan turned the handle and prepared to meet his doom.

King Varathorn was one of the most handsome men Kestan had ever seen. His face was as pale as the marble statues that inhabited his formal garden and his hair was an ashy blond, almost silver in certain lights. He wore it long, tied back with a black ribbon, but no one looking at him could ever mistake him for a woman. Varathorn's jaw was wide and angular, his eyes grey and calculating. They raked over Kestan now and Kestan had to stop himself from reacting to the scrutiny. Kestan's weakness had always been beautiful men and if King Varathorn hadn't been his employer, Kestan knew he would have tried to become better acquainted with the man. Kestan knew his place though, knew that the likes of King Varathorn were not for him.

"Ah, Kestan," said Varathorn, putting down his quill and shaking sand over his letter. "You know that I will have to dismiss you, don't you?"