Blog Tour/Guest Post: Talon of the Hawk by Jeffe Kennedy

When I do guest posts like this, I ask my lovely blogger hosts to give me a suggested topic. This is because I’m just SO out of ideas for blog posts. Also, I’ve been a writer long enough that I don’t have a good sense any more of what readers are most interested in hearing about.

But this can be a double-edged sword, because sometimes I get a topic like this one: to name five (or ten) writers I admire.

At least they gave me the option to do ten, right??

This is always difficult to answer because I have to pare down a list of hundreds, if not thousands. But this question is particularly interesting because it’s about writers I ADMIRE, which isn’t the same as the ones who write books I like or who are my besties.

Admiration is a different thing and it was interesting to contemplate. So here’s my list of ten (of course!) writers I admire and why.

Margaret Atwood – Because she writes in whatever genre she wants to, to tell the story that interests her. She’s ballsy and unapologetic. She’s also written some of my favorite books of all time – and each feels like something totally new. And she’s on twitter, saying witty things. Awesome.

Carolyn Crane – Okay, she IS my bestie and critique partner. But I admire Carolyn for sticking to her guns on self-publishing her books (after an unhappy experience with traditional publishing). Her commitment to producing quality books – you would not believe how hard she works! – continues to inspire me.

Neil Gaiman – Oh look, the only guy on my list! Not only is Neil a brilliant writer, but he remains a humble, even self-effacing, and genuine person. With over two-million twitter followers and he still personally engages with readers and offers sage, thoughtful advice and answers questions? Amazing.

Thea Harrison – Last fall I started reading Thea’s Elder Races series and it’s SO GOOD. She impresses me so much how she continues to spin fresh, new and compelling stories. Also, she’s been writing a *long* time under various names. I admire her so much for having that kind of career staying power.

Darynda Jones – So, yes, Darynda is also a good friend. And I’ve known her since just before her Charley Davidson series came out and has become such a phenomenon. What I admire about Darynda so much is that she still comes to our local chapter meetings, has no ego over her success, and generously helps other writers. She is my model for how to be graceful with huge success.

Ursula Le Guin – One of the lions of the fantasy genre, Ursula has been writing forever (it feels like) and stands up unashamedly for quality in genre fiction. She said amazingly smart things about genre fiction when she won the Medal for Distinguished Contribution to American Letters last year (http://www.nationalbook.org/amerletters_2014_uleguin.html#.VSVRMJNyRsk) and set Katsuo Ishiguro back on his heels for his obnoxious remarks about the fantasy genre (http://bookviewcafe.com/blog/2015/03/02/are-they-going-to-say-this-is-fantasy/comment-page-1/). She is one of my heroes.

Anne McCaffrey – Another long-time veteran of SFF, Anne blazed a trail in mixing up fantasy and romance, a path I greatly appreciate her carving out for us. Though practically every woman I meet who reads SFF will say that Anne McCaffrey books were formative for them, I feel like she doesn’t get enough credit for her huge impact on the genre.

Anaïs Nin – Another pioneer of her era, Anaïs wrote frank and open erotica from a woman’s perspective. Even when she wrote from a male point of view, the female gaze is strong and compelling. Her famous quote, “And the day came when the risk to remain tight in a bud was more painful than the risk it took to blossom” perfectly describes her bravery as a writer and as a person.

Nora Roberts/JD Robb – Nora pretty much tops every list of mine. She has had an amazing, smartly managed long-term career, she’s ballsy, intelligent, and an incredible writer who, as J.D. Robb, is up to over 40 books in her In Death series. I don’t know how she does it. I want to be her – well, her and Neil Gaiman – when I grow up.

Nalini Singh – Nalini is another writer who has managed to stay sweet, approachable and ego-free despite her glamorous level of success. She responds to people on twitter – with over 25K followers (you can tell this is a gold standard for me) – and she’s supportive of other writers. A really lovely person who continues to write astonishingly good books.

So there’s my list. And yes, I deleted and added names as I went to get to ten. What do you think of my criteria? Who would you add to the list? 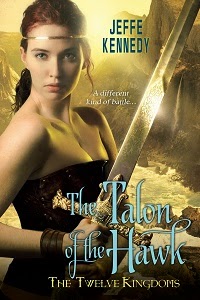 Three daughters were born to High King Uorsin, in place of the son he wanted. The youngest, lovely and sweet. The middle, pretty and subtle, with an air of magic. And the eldest, the Heir. A girl grudgingly honed to leadership, not beauty, to bear the sword and honor of the king.

Ursula’s loyalty is as ingrained as her straight warrior’s spine. She protects the peace of the Twelve Kingdoms with sweat and blood, her sisters from threats far and near. And she protects her father to prove her worth. But she never imagined her loyalty would become an open question on palace grounds. That her father would receive her with a foreign witch at one side and a hireling captain at the other—that soldiers would look on her as a woman, not as a warrior. She also never expected to decide the destiny of her sisters, of her people, of the Twelve Kingdoms and the Thirteenth. Not with her father still on the throne and war in the air. But the choice is before her. And the Heir must lead…

Jeffe can be found online at her website: JeffeKennedy.com, every Sunday at the popular Word Whores blog, on Facebook, and pretty much constantly on Twitter @jeffekennedy. She is represented by Connor Goldsmith of Fuse Literary.