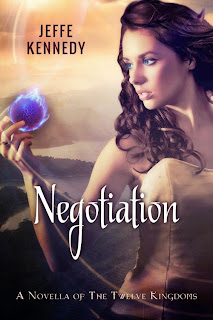 General Uorsin escapes the last devastating battle, only to find himself alone on a mountain, feverish and no closer to finding the paradise that drives him on. Salena, greatest shapeshifter and magic-worker of her people, springs the trap she’s set to protect her land—and to prevent the ravager Uorsin from ever reaching it.

Together, they spend a night setting the terms that will determine not only the rest of their lives, but the fates of the peoples of the Twelve Kingdoms—and the thirteenth.

Jeffe can be found online at her website: JeffeKennedy.com, every Sunday at the popular Word Whores blog, on Facebook, and pretty much constantly on Twitter @jeffekennedy. She is represented by Connor Goldsmith of Fuse Literary.