Guest Post & Giveaway: In the Beginning There Was Us by Ingrid Jonach 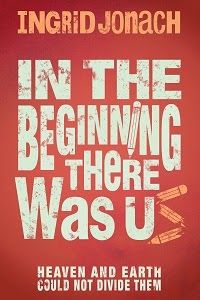 I love writing for young adults—mainly because I like reading young adult novels, so I guess I feel like I'm writing for myself. And, even though I’m now well beyond the traditional age bracket, my favourite contemporary author remains Sarah Dessen (who has just released her twelfth novel Saint Anything. Yay!).

When I was writing books for kids, I used to get asked all the time whether I had kids myself. I somewhat sheepishly replied, ‘No,’ as if this somehow disqualified me from being able to entertain and educate that age group. After all, I was a kid once myself.

And that’s exactly how I look at my obsession with young adult novels. I was—not too long ago—a teenager and it left an indelible mark on me. I think what really appeals to me about writing for young adults is that you’re exploring the transition to adulthood, which gives you some really heavy themes like the loss of innocence and search for identity, coupled with characters who vary vastly in maturity.

I’ve always been a big fan of fantasy—more so than science fiction. The books I adored growing up were mostly supernatural (for example, anything by Australian author Victor Kelleher). I particularly adored the horror genre. I devoured anything with vampires in it (WAY before Twilight) and cut my teeth on R. L. Stine.

When I started pitching my first young adult novel—When the World was Flat (and we were in love)—to agents, I actually described it as a fantasy novel. Embarrassing as this is for someone with a writing degree to admit, I wasn’t a reader of science fiction and thought of it largely as stories set in space (hard science fiction). When I finally pieced together that Albert Einstein and his Theory of Everything were science and NOT fantasy (duh!), I started describing my story as science fiction fantasy and then soft science fiction and now science fiction romance and sometimes speculative fiction. The genre, however, that I think really sums it up is the non-existent genre of urban science fiction (a hypothetical counterpart to urban fantasy).

My follow up young adult novel, In The Beginning There Was Us, is also urban science fiction (I’m just going to go ahead and coin it as a genre). Both of my young adult novels look at re-imagined histories and possible scientific explanations for the inexplicable in a contemporary setting. For example, scientific theories I have developed (or dreamed up) about ghosts and luck. I use the term ‘scientific’ loosely, of course. The theories are only based in science – the rest is based in what if?

You know how kids go through the ‘why?’ phase. They ask what you’re doing and when you tell them they want to know why. And when you tell them why their next question is inevitably, ‘why?’ I think I’ve never left that phase behind. I enjoyed maths at school until my teachers stopped being able to explain to me why I needed to understand trigonometry and calculus. Then I dropped it (something I somewhat regret, but that saw me pass my final exams with flying colours!).

This insatiable curiosity has led me to the science fiction genre. The romance that’s spread throughout my novels is just the icing on the cake. Couple both of those with the young adult demographic and I have so much scope for my imagination!

Title: In The Beginning There Was Us
Author: Ingrid Jonach
Date of Publication: April 28, 2015

What would you do if you were God? If you had the power to not only give life, but take it away in the blink of an eye? These are the questions that haunt fifteen-year-old Abbey Baxter after she resurrects a boy, long lost to the ages.

The achingly beautiful and eternally melancholy Cole not only serves as a welcome distraction from her long-time crush, Elwin, but also eases the heartache that persists since the sudden passing of her younger brother, Junior, four years earlier.

As the intrigue of her relationship with Cole deepens, so too does the mystery that surrounds a growing phenomenon sweeping through her small West Virginian town, transforming the lives of its residents. Around her, two bedroom cottages are transforming into mansions without explanation and residents are waking up to bank balances that have tripled overnight, all under the watchful gaze of the sinister American Laboratory for Particle Physics, located on the outskirts of town.

As Abbey searches for answers in a bid to solve the mystery in partnership with Elwin, she’s forced into a realization that that some things are better left buried, including her newfound love, Cole.

This cautionary tale of heartache and obsession explores the endless possibilities of the universe and its devastating impact on two young lovers from different worlds.

Her young adult sci fi romance novels When the World was Flat (and we were in love) and In The Beginning There Was Us are available now.

She is also the author of the picture book A Lot of Things and the chapter books The Frank Frankie and Frankie goes to France published by Pan Macmillan Australia.

Ingrid has worked as a journalist and public relations consultant, and has a Bachelor of Arts in Professional Writing with Honors in Communications.

She lives down under - in Canberra, Australia - with her husband Craig and their pug dog Mooshi.

Ingrid is giving away an ebook copy of IN THE BEGINNING THERE WAS US and WHEN THE WORLD WAS FLAT (AND WE WERE IN LOVE)! Open internationally.