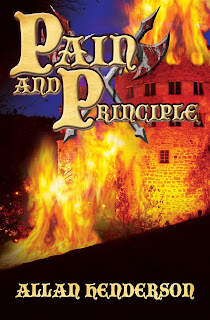 Britannia, a far flung outpost of the Roman Empire, is under constant attack from the Picti, Scotti and Saxons. Caius Suetonious, Legate of Legion XX Valeria Victrix, is at the forefront of the struggle to repel the invaders. He has successes but the battles seem to go on. He takes under his protection Ursus, who has become King of Deceangli following the death of his father. The battles continue but Ursus still finds love with Angharad, a princess, who becomes his wife and forms the bedrock of his life.

Their descendants continue to battle the invaders. Artorius, grandson of Ursus, emerges as a leader in the defence of South Wales, aided by the Romans, who are under constant threat of being ordered back to Rome to shore up its weak position.

Atorius, as was his grandfather, is influenced in his decision making by a mysterious race, the Old Ones who practice ancient magic.

Artorius eventually forms a realm in South Wales and names it Camelot. Is this the origins of the legend of King Arthur?

Legion XX Valeria Victrix commanded by Legate Caius Suetonius made a sweep through the mist-laden hills east of Yr Widdfa in late autumn before wintering in its fort near Deva, forcing remnants of a Scotti force who had escaped from the last battle of the season down onto the waiting spears of a cavalry screen in the valleys. The use of heavy infantry instead of auxiliaries for this energy-sapping task indicated the firm intention of Caius to make his legionaries fitter than Illyrians, reputedly the best in the Roman army. In an ill-conceived attempt to impress Caius by demonstrating my barbarian worth, I attempted to jump a wide crevasse with the frivolous indifference and self-assurance of youth and was justly punished with a crunching fall and a broken thighbone.

Four men of the Dark Ones rose from behind a twist in the crevasse, and their leader, typical of his race – small, dark and taciturn – spoke softly like the gentlest breath of wind.

Throughout my infancy, my misdemeanours evoked the warning from my mother, ‘Be good or the Dark Ones will take you to live where there is no sun.’ My inherent fear of them emptied my mind of my body’s pain, and I wondered how one of the Dark Ones knew my name.

Caius looked down and called to me, “Ursus, what is it?”

“A further part of your education is about to commence. Are you able to comprehend advice with pain tearing at you?”

“The Dark Ones are indebted to my legion and your father. My return to Deva will be unhindered without you.”

He removed his crested helmet revealing his trimmed brown hair, wiped his broad brow, and added, “Naturally, you will return to us in Spring or the life of your tribe is forfeit. You must accept the dice as they fall, Ursus. Farewell for now.”

I thought I detected menace in his voice but that fracture pain could be affecting my senses. I dreaded the months ahead with the Dark Ones. Cadell my hound came to me, whined, and licked my face. Thank Jupiter he was with me.

I rubbed his silky ears, looked at the Dark One who had offered to tend me, and said resignedly, “I am in your hands.”