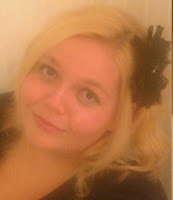 Isabelle Saint-Michael is a cupcake enthusiast, shoe addict, and globetrotter. She is known for her sense of adventure and geeky hobbies. She is frequently seen haunting coffee shops and pubs into the wee hours of the morning. No matter where she goes, shenanigans and mirth are never far behind.

I outline all my stories before I write them, but I let magic happen within the guidelines I set for myself. A lot of times I won’t know if a scene is going to be funny or serious until I write it.

My characters do nothing but take over the story. It’s a large part of why I write in the first person. I want people to feel like they are experiencing the story first-hand because my characters often have a louder voice than I do.

Coffee. All right, my editor is looking over my shoulder and insisting that coffee is not a real food so I should choose another one. Probably sushi.

So I’ve traveled quite a bit in my life already, but my assistant Kenzi and I are going to Scotland for a month next year for research. I’ve spent quite a bit of time in Europe and Asia. I think I would like to see more of South America next.

Totally. I live in Seoul, South Korea right now, but my publisher is based in the UK and I’m American. The UK, China, Korea, Australia, and the North Pole all show up in my books and blog.

I do. I love singing along loudly and out of key while I write.

Dragon’s Guide to Slaying Virgins is much more of a fantasy with a love story and sexy scenes in it than it is a romance with fantasy elements. It’s not about the Hero and Heroine overcoming something so they can be together. It’s about being together despite everything that is going on. The romance is totally there, but it’s mixed nicely together with daring sword fights, mysteries, and heartbreak. Through it all, I do promise a happy ending.

1.) You can’t please everybody. 2.) It’s never easy writing something that challenges the common perception of a genre. 3.) If you aren’t writing a story you love, why are you writing it?

Write more diversity into my cast of characters.

I have had some amazing mentors during my life. I have an over-the-top unbelievable mom who proudly tells people her daughter writes “Elf Smut”. AND my fans. Honestly, I may not have tens of thousands, but the fans I have are the world’s most amazing.

Don’t be afraid to write something that isn’t mainstream. Don’t feel like you have to tell a story a certain way because that’s what is popular in the genre right now. Write a book you can be proud of and that you would want to read. Twenty years from now you won’t want to look back and hate your early work because you sold out or weren’t true to yourself. It may be a quiet and lonely road sometimes, but at least you know it is your own.

To date my favourite book is Wuthering Heights by Emily Bronte.

My favorite writer, though, is something entirely different. I would not be the writer or the reader that I am without the works of Robert Lynn Asprin or Anne Rice. 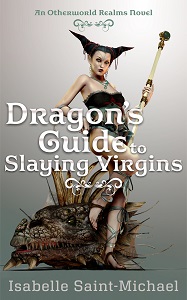 Lady Morgan is a Knight of Queen Mab’s court. She’s earned it too – while most other Fae were playing tricks and using come-hither glamours on the unsuspecting, she was out saving the day – and finding true love.  But when fate steals her one shot at happiness, Morgan decides to find out if there really is no job, too big to handle alone.  Armed with a strong sword arm, a never-ending supply of wit, and very little magic, she is willing to take on the most dangerous of enemies…

Vallen is what most knights would consider their mortal enemy: a Dragon.  He’s also Sir Vallen, a member of an ancient order, and the years since he joined have made him as hard and grumpy on the inside as he is scaly on the outside.  His honor would never allow him to take the easy path, though, only the right one… which leaves him in something of a predicament when he first meets Lady Morgan…

When the strings of fate cross, Knight and Dragon set aside their differences to fight a common foe – and find the second chance at love they never knew they were looking for.

Practical Uses for Princes with Pointed Ears
Holiday Spirit for Hire
And of course the epic blog “Elven Life” that started it all.