Growing up, I was very fortunate to be raised in a family where my brother and I were never told we couldn’t do something. From a very young age, my parents instilled in us that we could accomplish anything we set our mind and our heart to, therefore at sixteen, I decided I was going to be an author. I had always written short stories and poetry, so in high school I decided to try to write a novel and I did. It was a lovely sweet teenage romance and I thought it was the best piece of fiction ever written, so naturally, I submitted it to Harlequin Romance. But not only did I submit my novel, without a clue how to do so…I also pitched them a new series line. When I think back on it now, I marvel over my lack of fear and possibly common sense, but either way-off it went.

I remember getting the rejection letter because it was summer time and I was sitting on my front step with a few friends when the mail courier arrived with the envelope. I was so excited I couldn’t breathe and when my friends asked what it was, I remember saying-“Harlequin wants to publish my book!” I was so naïve back then  What was actually inside though was almost as good. The letter was a rejection, but a very positive, helpful one that said my writing showed promise, but they didn’t currently have a YA line and in order to write for the adult lines, I would need more life experience. It went on to provide some helpful writing resources, and they encouraged a future submission.

Flash forward a couple of years-okay eighteen years, and I am about to release my 9th book-BREAKING HER RULES. The first book in my new MMA Sports Romance series releasing through Berkley/NAL.  With three holiday themed novellas and my Harlequin Heartwarming Brookhollow series, it’s been a busy four years since my first novella was published through The Wild Rose Press, but I’ve enjoyed every moment.

Eighteen years ago, writing full-time was a dream. One that I’m so glad I never gave up on. 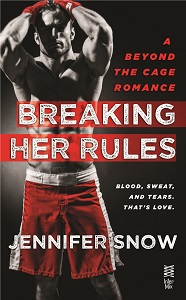 MMA fighters go the distance in this all-new series from Jennifer Snow, author of the Brookhollow novels.

Walker Adams was supposed to follow in his lawyer father’s footsteps, but instead he’s training to be an MMA fighter. And while he works for his chance to make it in the Maximum Fight League, he’s bunking on his baby sister’s best friend’s couch. Gracie Andrews is all grown up—in all the right places. But she’s engaged to the fight match-maker who holds Walker’s career in his hands…

Gracie had almost convinced herself that she’d put her silly childhood crush on Walker to rest. But the sight of him sleeping in only a pair of boxer briefs makes it clear that some things never change. And as old sparks turn to flames, Gracie is forced to decide between the future she thought she wanted or the man she’s never stopped loving…

Jennifer Snow lives in Edmonton, Alberta with her husband and four year old son. She is a member of the Writers Guild of Alberta, the Romance Writers of America, the Canadian Author Association, and SheWrites.org.  She is also a regular blogger on the Heartwarming Authors site and is a contributing author to Mslexia Magazine, WestWord Magazine and RWR. She has also taught RWA Chapters courses online.  Her 2013 Holiday Romance-The Trouble With Mistletoe was a finalist in the 2014 Golden Quill Contest and the Heart of Denver Aspen Gold Contest.

Her publishing credits include two holiday novellas, previously published by The Wild Rose Press, now re-released or being re-released as self-published editions through Amazon. The Mistletoe Fever was an Amazon bestseller for two weeks in the category of Kindle Short Reads. Her six book small town, Brookhollow series is published through Harlequin Heartwarming and she has a new MMA sports romance series releasing through Berkley/NAL Intermix in 2015. RT Reviews has given each of her Brookhollow series books 4 stars.

She also hosts an annual SnowGlobe Award contest in recognition of holiday themed romance stories, with over forty entries each year, with participants ranging from new authors to NYT Bestselling authors, such as Brenda Novak and Sarah Morgan.

More information about the contest can be found at www.snowglobeawardcontest.vpweb.ca

More information can be found at www.jennifersnowauthor.com

5 e-book copies of BREAKING HER RULES