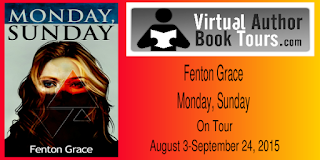 
Fenton Grace was born and raised in New England. She graduated from Brown University with a degree in French. She enjoys playing piano, tennis, and keeping in shape with Pilates.

She’s worked in the entertainment industry at several television and movie studios in a variety of business services roles. Happily married for 17 years, she is the proud mother of two kids and currently lives in beautiful Southern California.

Monday, Sunday is her first novel.

That’s a great question.  For my novel “Monday, Sunday,” I let the story flow.  The characters told me where they wanted to go and I followed them.  There wasn’t a time where I had to dictate what they should or shouldn’t do.  I had to edit a lot though, because much of what they revealed to me didn’t fit the needs of the story.

That being said, I now outline.  The reason for this is two-fold:  time and effort.  By taking the time upfront to plan and map out key points of the story, I can save a lot of time, effort, and frustration from having to rewrite down the line.  It can be very hard and painful to have to cut away at characters, storylines, and sometimes purely wonderful scenes or dialogues simply because they don’t fit the story.  Outlining beforehand doesn’t necessarily eliminate all of this, but it certainly reduces it a great deal.

In “Monday, Sunday,” Laney’s best friend Erin did want to take over the story.  She is a quite a powerful woman, and she had a lot of pent-up anger.  Opinionated, secure, but in pain.  There was a point early on when she threatened to dominate.  I had to reign her in, cut back on her characterization actually, so that she didn’t overshadow Laney and her dilemma.  Had I written the novel differently, from the points of views of other characters, including Christopher’s, Bill’s and Erin’s, I could have incorporated much of this into the story.  But for me, I always wanted to stay very close to Laney’s point of view without going into the hearts and minds of the other characters.

Although I write in the morning, I’m actually a night owl.  I write early because the day hasn’t begun.  I don’t have any thoughts or preoccupations clouding my mind.  I can start with a blank slate, a blank page, and immediately put ink to the screen.  I only do this for writing though.  I don’t like to get up early.  If it were up to me, I wouldn’t rise until noon.

I’m a peace and quiet kind of person.  I don’t like to be distracted while writing.  So I don’t listen to any kind of music while writing or re-writing.  I generally like to get up early in the morning to write, when there isn’t much happening other than the birds singing outside.  Those tunes I can tolerate, but much more would irritate me.

If you want to write about real life and real problems, you have to write literary fiction.  Of course, literary fiction has its own rules.  It very much lives by the world of awards, small presses, MFA’s, literary magazines, and the like, all of which add to a certain level of credibility for an author.  What do you do when your work doesn’t fit neatly in these categories?  Let it slip through the cracks, try to mold it into one of the other categories?  The opportunities of self-publishing haven’t helped tremendously, as the market is flooded and there has to be a quick way to identify product.  I do think this marketization of work dramatically impacts the quality and kinds of writing that we have out there.  Authors must learn to write “by the rules”.  When they’re established, they can break them a bit, though very few do.

I’m a person who learns from my mistakes, whether it’s a real mistake or something I perceive to be a mistake.  The main thing I would do differently is to write in a specific genre.  That way, you have a targeted group of individuals who may want to read your work.  They may not, but at least you know who to target as an audience.  It’s also a better way of developing a fan base, so that previous readers will read your next works.

I would tell people to write what moves and inspires them.  Novel writing is a lonely craft, and there’s no greater reward than to love what you write.  If you don’t, you’re likely going to end up frustrated and disappointed.  Follow your passions.  If you think an MFA will help you, get one.  If you prefer to take a course at a local college or university, do that.  Join a writers’ group, so you can get constructive feedback.  Continue to read and learn.  There are a lot of great books about the craft.

Get books on screenwriting, characterization, plot, writing in different genres.  Learn the “rules”, then go about and break those rules.  You should try to write every day, maybe taking only one or two days off a week.  You don’t have to spend a lot of time at it either.  Just by spending an hour a day, you’ll see how quickly the pages can amass and soon you’ll have a novel on your hands.  Of course, rewriting is going to occupy much of your time from then on, but by then, you’ll know you can do it.  You have faced the fear of a blank screen or a blank page.  You know how to write, you have a story to share, and you will have done it.

Tenacious, hard-working, and kind.  I don’t give up easily and I’ve always enjoyed hard work.  I like challenges.  That’s why novel writing appeals to me in so many ways.  If it were easy, I wouldn’t bother.

I say kind because I care about people.  What they feel, their struggles, their hopes, their desires.  If you don’t care for people, novel writing isn’t a business for you.  I genuinely love all my characters.  If I didn’t, I couldn’t write about them.

My favorite book is probably “Wuthering Heights”.  I was introduced to it in high school and have read it many times since then.  I think it’s the most powerful love story ever written.  Sure, it has its flaws – some point of view problems and whatnot.  I think some people don’t relate to it because they have a hard time understanding the characters.  They want Catherine and Heathcliff to be “sympathetic”.  In the course of literature, I’m not really sure what that means.  They are in many ways despicable, monstrous, hateful, vain, spiteful people.  But I love them.  I find them fascinating, complex, moving beings.  Would I want them as a son or daughter?  Would I likely be their friend?  Hell no.  But I enjoy spending time on the moors with them.

I encourage readers to follow me on Twitter (@fentongraceus).  I also have a website, www.fentongrace.com, where readers can find current news about my current and future works. 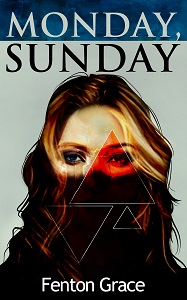 
Set in a small town in Colorado, Monday, Sunday tells the enthralling story of Laney Secord.  She is a 32-year-old single mother who finds herself attracted to a 16-year-old Eagle Scout, Christopher.  Unable to accept her feelings, Laney becomes involved with Christopher’s father, Bill.  In the course of a week, a romantic triangle envelops the trio and changes their lives in ways in which none of them could have imagined. A gripping story of a complex woman at a crossroads in her life. A woman who is determined to rediscover herself.  She becomes powerfully aware that every decision she makes could mean life or.. death.

"In this beautifully written and compelling novel, author Fenton Grace explores the consequences of flawed choices, the nature of betrayal and forgiveness, and the boundaries of sexual attraction." Noah, Book Reviewer