Book Spotlight & Giveaway: Even Vampires Get the Blues by Sandra Hill 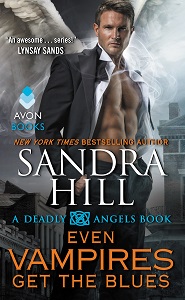 The fact that vampire angel Harek Sigurdsson was a Norseman in his mortal life doesn’t make thawing out after exile in Siberia any easier. But things heat up when his search for evil Lucipires connects him with Camille Dumaine, a human who thrums with sensual energy that can mean only one thing: she’s the mate Harek’s been seeking for centuries. . .

The SEALs call her “Camo” for her ability to blend into a crowd-yet Harek’s intense blue gaze singles Camille out like a white-hot spotlight. The security wiz was hired to help bring down a ruthless band of international kidnappers, but Camille senses an unspoken agenda-besides Harek’s bold declaration that she’s his “destiny”. Just Camille’s luck that the sexiest man she’s ever met may also be …a vampire!

Camille Dumaine was dragging her feet as she walked from the beach at the Coronado Navy SEAL training compound, her almost-thirty-year-old bones feeling every jarring step of her just completed six-mile jog in heavy boots on wet sand under a bright, ninety-degree California sun. Fun, fun, fun!

Didn’t help that she was sweating like a pig or that one of the swabbies in the newbie class had barfed all over her during “sugar cookies,” an exercise designed to punish. Also didn’t help that she heard a male voice call out, “Yo, Camo! The CO wants to see you.”

Same nicknaming was true of the elite WEALS, Women on Earth, Air, Land, and Sea, the sister unit to the SEALs, of which Camille was a charter member, two years of training and five years on duty now. Thus Camille’s nickname of Camo, which wasn’t a play on her name, or not totally, but was based her ability to camouflage herself, no matter the setting. Being invisible in a crowd could be invaluable for a special forces operative, male or female, she’d learned on more than one occasion. It was one of the prime reasons she’d been recruited to begin with.

A chameleon, that’s what she would put on her résumé, if she had one. Who knew, growing up in New Orleans’s upscale Garden District, that being of average height and weight, with plain brown hair and eyes, and just a touch of Creole coloring in her skin, would be such an asset? Certainly not her, and definitely not her father and mother, Dr. Emile Dumaine and Dr. Jeannette Dumaine, world-renowned professors of Southern studies at Tulane University and authors of numerous books on the subject, or her overachieving brother, Alain Dumaine, who was a NASA rocket scientist—(No kidding! There really are rocket scientists.)—currently teaching at Princeton University. But she had learned early on that, with the aid of makeup, clothing, a wig, even something as simple as posture or hand gestures, she could change herself into whatever she wanted to be. (Honest, Mother, I wasn’t in the French Quarter after midnight. You heard the police description of those underage kids, “drunk as skunks.” And they thought one was me?
Blond, six foot tall, boobs out to here. Ha, ha, ha.)

“I need to shower first,” she told Easy.

“I think Mac means now. They’ve been holding off the meeting ’til you got back from your run.” He sniffed the air and took a step back, even as he spoke, and then grinned. Easy knew well and good that SEALs and WEALS had to work just as hard, physically, after they’d earned their trident pins, to keep in shape. Smelling ripe was not so unusual. “The more you sweat in training, the less you bleed in battle” was a familiar mantra. “Just make sure you stand downwind,” Trond suggested.

A meeting? He mentioned a meeting? She went immediately alert. Rumors had been circulating for weeks about a new mission. One that involved taking down those African scumbags who had been kidnapping young girls for sex slaves. Boko Haram, or whatever terrorist-du-jour group felt compelled to perform atrocities for some self-professed higher good. Camille felt passionately about what was being done to these innocent children in the name of religion, and she wanted in on this mission. Partly she was infuriated by a women’s rights issue, but it was also her history as a Creole that fueled her fire. Camille’s great-grandmother many times removed—her namesake, actually—had been “sold” at one of the famous pre–Civil War Quadroon Balls when she was only fifteen.

She watched as another man joined Easy. The similarities, and the differences, between the two men were immediately apparent. Both were very tall, probably six foot four, lean, and well muscled, but whereas Easy’s attire—athletic shorts, drab green SEAL T-shirt and baseball cap, socks and boondockers—said military to the bone, this guy wore a golf shirt tucked into khaki pants with a belt sporting an odd buckle in the shape of wings, designer loafers without socks, and a spiffy gold watch. Whereas Easy looked as if he was about to work the O-course, the other man carried an over-the-shoulder, high-end, leather laptop case, more suited to Simi Valley. The most dramatic difference was between Easy’s dark high-and-tight haircut, and the new guy’s light brown hair spritzed into deliberate disarray. The pale blue eyes they both shared were the gravy on this feast for the eyes.

Camille wasn’t drawn to overendowed men, especially ones who were so vain they moussed their hair in the morning, especially since she worked in testosterone central where muscles were the norm, but holy moly! This man, probably no more than thirty, was the epitome of sex on the hoof.

She licked her lips and forced herself to calm down. I look like hell, she reminded herself.

On a good day, this superior male specimen wouldn’t give me a passing glance. After three failed near-marriages, I do not need another complication. Wash your mind, girl. While I’m at it, I better check to make sure I’m not drooling. “Your brother, I presume?” she said to Easy.

“How could you tell?” Easy said with a laugh. “Camo, this is my brother Harek Sigurdsson. Harek”—he nodded his head in her direction—“this is Camille Dumaine, the female Navy SEAL I told you about.” 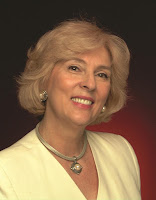 Sandra Hill is a graduate of Penn State and worked for more than 10 years as a features writer and education editor for publications in New Jersey and Pennsylvania. Writing about serious issues taught her the merits of seeking the lighter side of even the darkest stories. She is the wife of a stockbroker and the mother of four sons.

2 print sets of the previous 6 books in the series