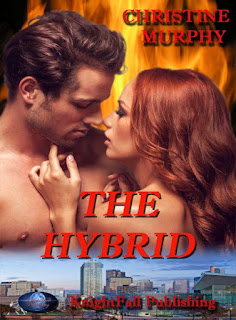 Sara, a hidden Hybrid disguised as a BioGen Monitor, will find an enslaved Justin being experimented on.  She will help him gain his freedom and in the process will gain her own.  Trust will grow between them and from that trust will blossom a love which will give them the power to escape BioGen.

Hands touched her skin and she tried to push them away because the heat was burning her up.  Justin’s voice came from so far away as he called out,  “Victor, I’ve got some medical supplies, but no intravenous.  Do you still have the emergency kit?”

Sara didn’t make out the answer and Justin’s following words became a garbled mess of jumbled syllables.  His hands still lingered on her touching her skin and she was tormented.  Part of her wanted him to keep touching her but part of her tried to escape while cascading waves of heat reacted to the contact.  Continuing to fade in and out she wasn’t sure what was real or what was her fever-induced imagination.  She felt the prick of a needle in her arm, a cooling wash of fluid, another round of heat which crescendoed into a blistering inferno until she cried out.  Her own whimpers seemed far off but the gentle feel of a cool cloth on her skin was crystal clear.

A caress calmed her and she tried to follow the strong hand that delivered it struggling against the blankets which cocooned her.  A heavy weight held her down when she struggled, but a warm murmur eased her until she stilled again.  Her eyes flickered open and awareness surfaced enough to know it was Justin who held her in his arms.  His handsome face was a picture of worry as he stroked his fingers through her hair and continued to murmur words to her.

Her hearing cleared for a moment and Justin’s broken words reached her when he whispered,  “Just a couple more hours, my little flame.  The sun will be up soon and you’ll feel much better.  Just, please, hold on for me.”

His little flame.  Her mind captured those precious words and held on to them just like she held on to her life.  Her insides were on fire while the infection from the damage the Monitors and guards had inflicted on her tried to defeat her.  Through it all Justin held her, whispered to her, and demanded she stay with him.  Did he mean it?  Did he want to keep her? Were the words of her being his a truth that he meant, or just a passing moment to help give her strength?  Yes, by the Fates she did wish to be his, but the odds were so against them, especially with her Hybrid abilities.

Lost again in her agony all she could think of was the possibility she could kill him.  She couldn’t take it if she harmed him with the strange fires that burned within her.  In her injured state she was surprised he had not already been harmed.  Again she struggled not wanting to hurt him but he held her down, brushed his fingers through her hair, and gently touched her cheeks.  He was trying to calm her but she was so lost until the feel of his lips against her temple had every cell in her body focused in on the one moment.

Her breathing caught and her heart seemed to pause in its beat.  Justin froze against her and she could feel the hard hammer of his heart.  Her body was completely limp, unmoving, but she managed to open her eyes.  He was so close, his golden-brown hazel eyes with those brilliant flashes of green just a breath away, and within them a pain that reflected her own.  And within the pain, a determination as his arms tightened around her and he rested his forehead against hers.

“Please, Saraphina.  Stay with me.”

The whispered torment made her want to cry out.  With a shaking hand she reached up and brushed her fingertips against his cheek.  The feel of stubble tickled her because of her hyper-awareness.  Slowly, with one fingertip, she inched closer to his lips needing to feel them.  It was her escape from everything tormenting her, haunting her.  Past, present, future combined in a growing haze until she reached her goal and the tactile feel of his firm lips became everything.

With the last of her strength she tried to lift her head, wanting, needing, to feel his lips against hers.  As much as she tried she couldn’t reach him and tears of frustration filled her leaving her gasping for breath.  A reflected image of grief sparked in Justin’s eyes and she hoped he didn’t think she was telling him goodbye.  She was going nowhere because she knew what her future was supposed to be now.  Her old caregiver had foretold it so long ago.  Her future was right before her…Justin…and she wasn’t going anywhere.  He was her future and she was going to protect him and his people no matter what. 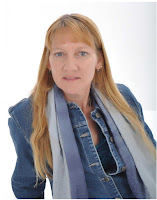 Christine Murphy started her writing career at a young age even before she was putting words to paper.  Living in the Midwest left her with plenty of time to read and develop her creative mind.  Her first short story was written in grade school and was in a fantasy-type style.  Later she took an online course in writing and created another story based on the adventures of a Native-American youth searching for her purpose in life and filled with lots of symbology.

Science-fiction fantasy was her main reading preference but quickly shifted to romance.  In the beginning she preferred Contemporary Romance but that didn't last long when she discovered Christine Feehan and JR Ward.  Paranormal Romance had infected her and she read as much of it as her voracious mind could adsorb.

Eventually Christine joined the work force, and although she continued to read, she didn't pursue her need to create her own worlds other than in her head.  Her imagination continued but reality kept her busy including a successful medical based career in the military.  Working as a clinical laboratory scientist she was stationed in several locations in the United States and in numerous areas of the world including England, Italy, Germany, Africa, and the Middle East.  Finally her career brought her to a small town outside the Tampa Bay area in Florida.  This is where she finally realized time is too short to put off those enjoyments in life especially when her husband was struck with leukemia.  He successfully recovered but it made her decide she wanted to pursue writing which seemed to be put off her whole life.

Within two years she had completed an entire series - The Sphinx Warriors Series, and started the first book of The Wild Clan Sagas.  Currently she continues to write from her Florida home while looking out her back lanai to a small pond where the wild-life gathers and the flowers bloom in exotic pinks and purples. This is her place of peace and freedom she has searched for all her life and where her husband and crazy African Gray Parrot, Raider, hang out with her.  It’s the place where her creativity runs wild while she spins tales of adventure and passion. She captures the unique characters, civilizations, conflict, passion, and love in her writing from the fantasies which still spin in her head.  She captures the strong, spirited, and powerfully attracted characters and all of their adventures and share it with others who are searching for that very thing to make their lives more exciting.

If she accomplishes nothing else in life, she hopes to share the romantically magical worlds and the lovers she sees with all of the passionate readers out there.  Her next projects are continuing to work on her Wild Clan Sagas and her Midnight Riders Series as she partners with KnightFall Publishing and CK Productions.