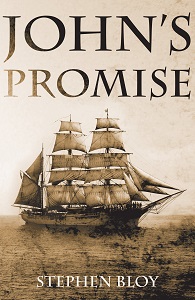 
John Best is a master carpenter who works hard to provide for his family in 19th century East Anglia. One day he meets a stranger, Luke Thackery; a chance encounter, which will change his life forever.

Luke encourages John to consider the plight of the labouring classes and to attend a protest meeting which soon turns ugly. A riot ensues and John is wrongly arrested and falsely accused of sedition, tried, found guilty and sentenced to be transported to Australia, far away from his beloved family.

After enduring many months of squalor, degradation, brutality and deprivation on board a prison ship, John finally reaches his destination. Not all of the convicts survived the journey and made it to Australia.
During the eight month passage, two guards become John's nemeses and frequently try to harm him. When he witnesses the murder of a fellow convict, John promises that, within a year he will avenge the killing and make the perpetrators pay for their crime.

John's Promise is the story of one man's struggle to survive the frequent violence, prove his innocence and clear his name, get justice for his friend and be reunited with his beloved wife Rebecca and return to England.

Lightly caressed by the motion of the sea, the Lady Harewood moved gently on its mooring. The sound of feverish activity and orders being bawled out could be clearly heard throughout the ship. Sailors were going about their business. Dozens of gulls, gannets and other seabirds were screeching and crying loudly as they circled, swooped and dived to feed on the shoals of small fishes that could be seen in the clear water. Some gulls sought easier pickings and chose to scavenge off whatever had been thrown overboard from the ship’s galley. Ropes and halyards were being strained as men, who were rhythmically chanting as they heaved and pulled. The wooden blocks and tackles and capstans creaked, groaned and clattered noisily as various types of cargoes, bellowing and bleating livestock and supplies, which the settlement would need, were noisily off-loaded on to the quayside. A cacophony of discordant sounds assaulted the ears.

Under the blue cloudless sky and with the sun glistening off the turquoise water, it was a vibrant energetic scene that any bystander would enjoy taking the time to watch. Sadly though, for those who watched but did not know, the scene was not quite as simple and innocently idyllic as it appeared. Out of sight, below the main deck, another much more wretched cargo would soon be offloaded. The Lady Harewood was one of His Majesty, William IV’s prison ships. It took people away from their families and transported them to a godforsaken place they didn’t want to go to halfway round the world. And, from where most never returned. Despite its handsome appearance and elegant lines, the Lady Harewood was a sad ship!

ed. Soon the order would be given to climb up the companionway stairs away from the dank stench and the semi-darkness of the prison deck, into the bright sunlight. Whatever fate was waiting for him in this strange new land would then be revealed. As they waited, some babies, who had been born during the long passage, and had survived, were pitifully wailing. Attempting to soothe them, despairing mothers were holding them to their shrunken and almost dried up breasts. Though they eagerly took the nipple, the mothers were so thin and wasted there was little nourishment to be had.

John could hear the other convicts speaking but, at that moment he didn’t feel much like talking. Standing there in the stifling heat amongst the crowded squalor of where he had lived, ate and slept for many months, Rebecca’s words of warning and how they had argued, again came to mind.

‘Why are you getting involved? These are not matters for the likes of us ...it’s no business of yours, John Best,’ she had said causing him to scold her.

‘Woman, you have a harsh tongue and should not speak of honest labourers so...have you no pity? Rebecca, these are our friends and neighbours and good fenland men just like us ...they have no work and find it hard to live off the meagre allowances the parish pays them.’

He could picture so vividly how red his and Rebecca’s faces had turned as they argued; his from anger, hers from exasperation. Uppermost in his mind, was how she had tried to make him see sense, as she saw it.

‘John, if they seek only honest work and bread, they will not find it by being filled with bravado and Dutch courage from drinking and starting riots in Littleport and God knows where else,’ Rebecca had loudly replied and wagged her finger at John.

‘...You’ll be better served by having no part in it. I don’t want to be the wife of a convict or the widow of someone hanging from the scaffold because they’d got involved in matters that were not their concern,’ she had angrily added as she stormed out of the room and back into the kitchen.