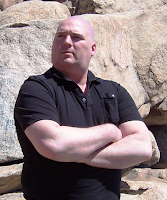 On May 11, 1995, at 30, Roy’s life was irrevocably changed. After walking into the hospital, he was admitted and later received the worst possible diagnosis – Primary Progressive Multiple Sclerosis. His doctors gave him two years to live, and he left the hospital in a wheelchair. After battling Multiple Sclerosis for nearly 16 years, Roy began devoting his energies and passions to the full-time art of storytelling. His disability has brought with it an unforeseen blessing. He can finally take medications to alleviate some of the pain from his MS and focus on the pleasures of character creation and the joys of putting words to paper.

As an author, Roy A. Teel Jr. is very diverse, and his works include both fiction and nonfiction. His previous works include The Way, The Truth, and The Lies: How the Gospels Mislead Christians about Jesus’ True Message (2005), Against The Grain: The American Mega-Church and its Culture of Control (2008), Light of Darkness: Dialogues in Death (2008), and And God Laughed (2013).

In 2014, Roy began publishing his latest and largest project – a 30-book geographically-centered hard-boiled, mystery, suspense, thriller crime series: “The Iron Eagle Series.” The main character, a former Marine Corps Black Operative turned rogue FBI agent, hunts serial killers in Los Angeles. Each novel addresses different subjects, and while fiction, all titles deal with real world subject matter. “The Iron Eagle Series” is not about things that can’t hurt you. What happens in these novels can happen to any one of us if we let our guard down and/or are in the wrong place at the wrong time. To learn more, go to http://ironeagleseries.com/

Roy lives in Lake Arrowhead, CA with his wife and children.

Interesting question! I write linearly from beginning to end. When I start a new book in the Iron Eagle series, the only thing I have to work from is the prologue that I wrote from the previous book. So, do I know going into each installment in my 30- novel series what’s happening, who the killer or killers are, and where the story is going to lead me? No. Each title has a natural maturation. Robert Frost is right: “no surprise for the writer, no surprise for the reader.”

Absolutely, and I allow them to because writing a series is not like writing a single book, whether fiction or nonfiction. I am currently writing book 14 in the Iron Eagle series. At this point, the characters are well defined. They have their own personalities, so when I’m writing it’s like watching a movie in my mind and recording what I see. In a series of this scope, there are characters that will be there until the end. They truly take on a life of their own and, thus, guide the storyline. Do they surprise, scare, amuse, and entertain me? Of course! The Iron Eagle is based in modern day Los Angeles. It’s a series about things that can and do hurt people every day in the real world when they let their guard down or are in the wrong place at the wrong time. While the Iron Eagle is fiction, and the world that he and his fellow characters live in is fiction, what happens on the pages happens in LA and around the world.

Pizza. I’m from New Jersey and lived in New York. There is nothing better than a great slice of pie with sausage, mushrooms, red onions, garlic, and black olives.

Night owl. I have relapsing progressive multiple sclerosis and am now on disability. Sleep does not come easy with my illness as there is a great deal of pain. As a high-level executive prior to retiring on disability in 2011, it was very difficult to run a multimillion-dollar business on only three or four hours of restless pain-riddled sleep. Today, while I am still a night owl, I have the luxury (thanks to a great long-term disability policy and social security disability) of being able to allow my body to run on a more natural cycle and use pain medication as needed to help with sleep. I usually go to bed between four and five a.m. (and, yes, I do write during most of my waking hours).

Thanks to business, I have traveled extensively. I have seen the Atlantic and Pacific oceans in the same day. I have chased the sun around the world from Los Angeles to Europe, the UK to Asia, and the South Pacific. I have lived the traveler’s life, and I am much happier with my feet on the ground with my wife by my side and my two best furry friends, Sanford (Sandy), our springer spaniel, and Oscar, our tabby cat who rules the house, singing the songs of his ancestors.

The Iron Eagle series is based in Los Angeles, California, a melting pot of cultures and crime. As the second largest city in the United States, virtually any scenario works within its boundaries.

No. I must have silence when I write. My wife and I work only feet apart in different offices here in our home. We both require total silence. My wife will put on noise canceling headphones while she runs her writing and editing business. I am able to ignore most white noise, and once I am in the world of my characters my wife can tell you she can be talking right to me, and I don’t hear a word she says. It’s not just typical male selective hearing. I just tunnel in, and the world falls away.

Devil’s Chair, the sixth installment in the Iron Eagle series, is set in January in Valyermo, Devil’s Chair, and Devil’s Punchbowl in Los Angeles County. The bodies of several young men have been found, and while there are no signs of foul play, something terrifying is going on in the small farming community. When a missing sales executive is found butchered and neatly wrapped and stacked in a meat locker, LA County Sheriff Jim O’Brian and FBI Special Agents John Swenson and Steve Hoffman must unravel the mystery behind the killings and uncover a terrifying conspiracy.

I began publishing books 10 years ago, including fiction, nonfiction, and scholarly books that are taught in both secular and religious universities across the U.S. and around the world. Writing is rarely about making a living. It rarely pays bills or puts food on the table.  And from experience, I’ve learned that writing is the easy part.

Publishing involves editors, beta readers, book designers, and graphic artists. In the self-published world, there are no advances, and writers are responsible for every detail every step of the way, including publicity and marketing.

Writing and self-publishing is a business. Books are a commodity, a tangible asset mined from blood, sweat, and creative tears. However, in a world where publishing is changing by the hour, where books are competing against upwards of a million other books a day, it is a constant battle to gain readers and an audience.

For those who think they can just write a book and publish it and the rest will just happen ... I’m here to tell you it doesn’t work that way.

There is an old saying, “Hindsight is 20/20.” I’ve missed opportunities, but I have tried to learn from my mistakes. Outside of my obvious health issues, I wouldn’t change a thing.

The Iron Eagle series was born out of tragedy after the brutal murder of one of my childhood friends at the hands of William Bonin, the Freeway Killer, here in Los Angeles on Memorial Day in 1979. I was 14; my friend was 13. Through that tragic situation, the idea of a protector and vigilante was born. It took nearly 40 years before the exploits of the Eagle would be put to paper. However, the Iron Eagle is now alive and moving in my fiction, and he offers swift and brutal justice for the worst of the worst killers in Los Angeles and Los Angeles County.

Keep your day job. The odds of making a living as a writer are very, very slim. However, be faithful to your craft, practice it daily, take courses, get involved in workshops, but, most importantly, write for yourself and become thick skinned. Write about the things that interest you.  In my opinion, there is no such thing as writer’s block. If you sit at the keyboard, the words will come.

First, Ernest Hemingway’s, The Old Man and The Sea, for its lessons in perseverance. Next, John Steinbeck’s, Of Mice and Men. A story of true love, caring, and compassion. And finally, Ayn Rand’s, Atlas Shrugged. The economic impact of a socialistic America where the more the government gave the more the people wanted. It was not enough that these men and women provided the jobs, the creativity, and sacrificed to make the world a better place. The people cried out for more and government took from the rich and gave to the poor until the “Motor of the world Stopped,” and the world kept asking, “Who is John Galt.” 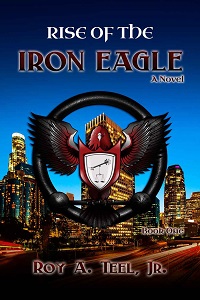 The Iron Eagle Series, by Roy A. Teel Jr., is a hard-boiled, mystery, horror, suspense, thriller crime series that is expected to span 30 books. The main character, a former Marine Corps Black Operative turned rogue FBI agent, hunts serial killers in Los Angeles. Each novel addresses different subjects, and while fiction, all titles deal with real world subject matter. The Iron Eagle Series is not about things that can’t hurt you. What happens in these novels can happen to any one of us if we let our guard down and/or are in the wrong place at the wrong time.

The city of Los Angeles is no stranger to violence. It has both a colorful and grotesque history with it. Sheriff's Homicide Detective Jim O'Brian and FBI Profiler Special Agent Steve Hoffman are also no strangers to the violence of the sprawling metropolis, but in the past decade something has changed. There's a serial killer preying on other serial killers - some known by law enforcement, others well off radar. "The Iron Eagle," a vigilante, extracts vengeance for the victims of Los Angeles' serial killers.

His methods are meticulous and his killings brutal. With each passing day, "The Iron Eagle" moves with impunity through the streets of Los Angeles in search of his prey. O'Brian and Hoffman create an elite task force with the sole purpose of catching "The Eagle" and bringing him to justice. But the deeper they delve, the more apparent it is that he may very well be one of their own. As the two men stare into the abyss of their search, the eyes of "The Iron Eagle" stare back.

Is The Iron Eagle a psychotic serial killer? Or a new breed of Justice?

*Content Warning: The Iron Eagle Crime novel series contains mature subject matter, graphic violence, sexual content, language, torture and other scenes that may be disturbing to sensitive readers. This series is not intended for anyone under the age of eighteen, reader discretion is advised.