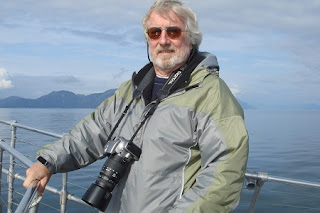 Philip C. Elrod was born and raised in a small town atop Sand Mountain in Northeast Alabama. After serving with the military in Germany, he returned to the United States and continued his education at the University of Florida and Florida Southern College, majoring in Industrial Engineering and Economics.

Phil is a computer system analyst/designer and securities trader. He resides in Richardson, Texas with his wife and his two “bosses”, a Japanese Chin and a miniature Shih Tzu. His interests include writing, reading, astronomy, photography, outdoor cooking, and travel.

Both. I start with a general plan, but it almost always changes as the story starts to unfold.

Sometimes I become so immersed in the writing that the characters do seem to be alive and have minds and lives of their own. To me, it is better to feel that I am a part of the drama, a part of the scene, instead of describing or observing it from outside.

First of all, I am not a food person. I will eat what is available. However, I have to admit that I love a fine steak. You could say that my favorite food is what I am eating when I’m with good friends and loved ones.

I am a night person and feel best after the sun goes down. However, I have no problem with rising early and starting to work when I need to.

I have traveled extensively in Europe, North American, and other areas of the world, I would love to visit New Zealand to experience its spectacular natural beauty. One of my favorite places is Madeira. I have been there many times and even seriously contemplating moving there. It is a favorite and I always dream of going back again.

Absolutely. For example, my current books include places ranging from Washington DC to Key West to outer space.

Indeed. Music is not only relaxing, it frees my mind so that creativity is unfettered by outside thoughts.

I enjoy writing science fiction. My debut novel Mylea: The Journey Begins is the prequel to the Mylean Universe Chronicles. It tells the story of a technologically advanced civilization and their desperate fight to survive a cosmic cataclysm. Ultimately, their epic journey brings them to Earth seeking the assistance of a unique earthling. The second book in the series, The Krakow Klub, deals with what the earthling does with his Mylean legacy.

I would hire professional assistance for marketing much sooner than I did.

I have always been interested in astonomy, science, and technological advances. These interests have played strongly in my Mylean books. I am also an avid student of politics and sociology.

If it itches, scratch it. You will never know whether you can or cannot write unless you try. Once you try listen to what others say. Constructive criticism is a most valuable tool.

Hey, it could have been worse!

I simply do not have a single favorite author or book. It would have to be genre spedific and I love several genres, the following are high on my list:
Astronomy: Carl Sagan and Stephen Hawking
Historical Novels” James Michener
Science Fiction: Isaac Asimov and Michael Crichton

The Krakow Klub is a fast-paced and exciting science fiction novel. It was published in June 2015 and is available for sale on Amazon.

The story of one man's attempt to live a normal life, even though he is not normal.

The United States government is under siege. A secretive cabal of super rich elitists, The Krakow Klub, has initiated the final phase of its long-range plan to take over the USA from within. They have achieved control of the Presidency and the military. Their puppet in the White House has declared martial law. The Congress, The Supreme Court and many other political leaders not under their control are slated for elimination.

Only one man has the power to stop The Krakow Klub. His name is John F. Scott and he appears to be an ordinary human being. But he is part alien. His power is based on alien technology. Can he be trusted to stop the takeover and return power to a lawful government afterwards? Can he control his power once he unleashes it? Can he control himself during the process? Will he take the risk? If so, at what price?

So many troubling questions, with few clear-cut answers.

In a remote castle, north of Krakow, Poland

It was early December 1991. They arrived one by one. Strangers, but yet known to each other. After depositing their coats with the servants, they were shown to the elaborate study. The walls covered in ancient molded paneling were dark and lent a gloomy pall to the atmosphere. A large round table of mahogany was centered in the room, surrounded by twelve leather chairs worn with age. A fire was crackling in the enormous hearth, sending shadows cavorting across the room as the cobwebs that draped the corners seemed to come alive.

As they each took their appointed seat, an icy hush seemed to fall over the world. At the center of the table were decanters of the finest liquors and liqueurs with crystal glasses, as well as a small array of canapés, including a large crystal bowl of caviar. After all, these were no ordinary strangers, but scions of business from around the world. Anything less would have been an insult.

Obligatory pleasantries were exchanged along with formal introductions. The mood was solemn, almost sinister, as the business at hand was brought forth. Plans were proposed, suggestions made, parameters set. The verbal exchanges were lively but carried a diabolical undertone that, if heard by outside ears, would send icy chills up the necks of even the bravest of men.

Their gathering lasted well into the night and continued early the next morning. In the middle of the afternoon of the second day, through a haze of cigar smoke, they regarded each other with looks of satisfaction. Their leader spoke in low but firm tones as he detailed the final plan. When finished, he looked at each member, and then said, “So, we are agreed?” Each one in turn gave a brief nod. Though he never had any doubt they would, Number One was still gratified to know that he had chosen this group wisely, and their plan would proceed without question. Lifting his snifter of cognac, he proposed a toast, “To the world. Our world!”

On a remote island not far from Key West, Florida

As he exited the craft and first stepped foot on the island, he knew at once that he had found his home at last. The scent of flowers carried on the warm breezes that swayed the palms dotting the landscape, the lush greens, and the bright colors were like ambrosia for the senses. The villa just ahead was a magnificent specimen of architecture, just as the surrounding grounds were a landscaper’s dream. He had such wonderful plans for this, his tiny oasis of peace in the vast and troubled world. And he had the resources to make it happen.

Peace and tranquility, so often absent from his life, was finally within his grasp. The power he had at his fingertips would allow him to enjoy the comforts of life while still keeping his finger on the pulse of the ever-growing unease that was settling on the world around him. Yes, this small paradise would do nicely, and once his plans had become reality, he felt he would complete his journey. And what a journey it had been! From the rolling hills of Appalachia to the outer reaches of space. But even as he was finding his heaven on earth, all hell was about to break loose around him, and unbeknownst to him at that time, it would lead him into the proverbial bowels of a hell that would torment him forever after.