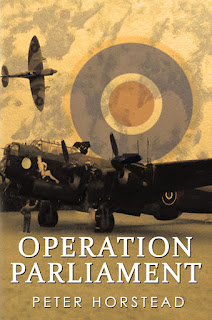 The sound of a ghostly Lancaster Bomber, its engines struggling and misfiring, has haunted the old airfield for sixty years.

In 1943, Johnnie Sanderson and his crew were seven brave young men who had volunteered to fight the tyranny of Nazi Germany from the air, flying the Lancaster Bomber, they had christened ‘Gloria', with 599 Squadron RAF.

Flak, searchlights and nightfighters generate the gut-wrenching fear of the nightly bombing sorties over war-torn Europe, and they quickly learn that the scythe of war reaps a deadly harvest amongst bomber crews.

599 Squadron trains to take on vital raids against Germany and Hitler's world threatening ‘Wunderwaffen' rocket program, culminating in the most important and dangerous sortie they have ever undertaken, 'Operation Parliament'. To ensure an Allied victory they must succeed at all costs, and from the beginning, those costs are very high.

Johnnie, though, after losing too many comrades and friends to the deadly war, has only one more mission on his mind - to get his crew home.

Little does he realise, just how long it will be before he can finally say,

Peter Horstead spent his childhood in Lincolnshire, ‘Bomber County', surrounded by RAF airfields. He spent eleven years in the armed services himself, and later took up flying. As a member of the RAFA Concert Band, he had the honour of entertaining and meeting, on many occasions, members of Bomber Command.

I'm too young to remember WWII as were my parents, who were born during the war and so don't remember much about it being only babies at the time. I didn't study it in History at school, as I'd given up History by then do to Geography. So what little I do know is from books or films, or from museums.

Recently we were at the Battle of Britain Memporial in Kent and it was both fascinating and heart-wrenching. They had photos of lots of different aircrews and underneath some it said that a particular pilot died a few days after the photograph. Lots of them didn't return and my heart was in my throat throughout most of Operation Parliament. There were also replicas of some of the planes, and that really helped with reading the book as I could 'see' what the planes looked like.

Every time the crew went on a raid, you never knew if they were going to make it back alive. Statistically, a lot of them didn't.

Well-written, well-researched, Operation Parliament puts you in the shoes of those young pilots. The courage they had was amazing. To go up in those planes, knowing that you may not make it back, it was awe-inspiring. They were scared, but they did it anywway - they overcame their fear.

Not to say the book is all doom and gloodm, there is a thread of humour throughout, as I suspect was probably the case with the real aircrews then. You had to laugh or cry.

With sympathetic, well-drawn characters, the book is well worth a read for any History fan.