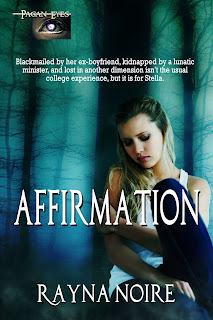 Stella’s college life transforms from sweet to rancid when her boyfriend asks her to do the unthinkable. How did she end up holding her best friend’s future in her hands? Anything she does will trigger the disastrous conclusion. If that isn’t bad enough.

Add in a lunatic minister, a demi-goddess, and a walk through another dimension full of vindictive shrubbery and wildlife. It’s far from the typical freshman year.

Oh, she tried not to think too much of the almost unknown senior who awkwardly asked her out to the senior prom. It was unfortunate he chose the morning her father stomped out of the house with a suitcase. The traumatic departure continued out on the front lawn where mothers with kindergartners stood on the sidewalk with strollers waiting for their oldest to board the bus.

Her mother clutched a skillet in her right hand because his abrupt announcement caught her in the middle of unloading the dishwasher. Her mother baited him by telling him that running back to his skanky ho would result in some incurable STD and a painful death.

The nearby mothers took a step back while covering their attentive children’s ears. Those with more than one child had more of a challenge as far as ear coverage.

Her father, halfway in his car, yelled back. “You ruined my life. Everything you touch you destroyed.” Catching sight of Stella, he added, “I wish you’d never been born.”

Most people at the bus stop probably thought he was talking to her mother. Apparently, that was the impression her mother received too, because she hurled the skillet at the car, dinging the door. Her father’s face suffused with red, and he opened his mouth, but no words came out. Instead, he closed the car door and sped off.

Her mother, suddenly aware of her audience, dusted off her hands, announced to the listeners, “Good riddance.” Her actions announced it was her plan to chase off her husband with a frying pan before work. Stella stayed on the front stoop staring at the departing car, knowing he’d been staring at her, wishing she’d never been born.

It was hard to stop thinking about it. So when Kevin Hardesty asked her if she’d go to the prom with him, she didn’t answer, barely even heard the words as she turned away afraid she might start crying again. Apparently, not quickly enough, because it was all over school that the idea of going to prom with Kevin sent her into an enormous crying fit by the end of the day. When the gossip finally reached her via Leah, she wanted to find Kevin and explain. She never had the chance. He hanged himself that night from the local park swing set. The police found him near midnight when making their nightly rounds.

Rayna Noire is an author and a historian. The desire to uncover the truth behind the original fear of witches led her to the surprising discovery that people believed in magick in some form up to 150 years ago. A world that believed the impossible could happen and often did must have been amazing. With this in mind, Ms. Noire taps into this dimension, shapes it into stories about Pagan families who really aren’t that different from most people. They do go on the occasional time travel adventures and magick happens.

2 Filled Swag backpacks US only