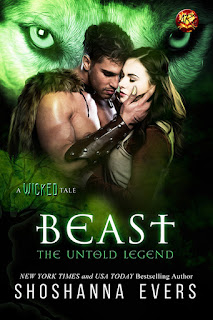 Deflowering the princess may just save her life.

Princess Justine found an unlikely ally when she stormed into the stables and found an angry, devastatingly handsome young man tending to her mare. Victor belonged to her soon-to-be Queen mother-in-law, and he had the whip marks on his muscled back to prove it.

The Queen, an enchantress well-accomplished in the art of black magic, turns Victor into a creature like no other.  He’s a ten foot tall beastly wall of muscle, animalistic sinew and savagery ready to unleash every primal urge coiled within him. At the Queen’s command, he kidnaps Justine on her wedding day to the prince — but refuses to kill her. Instead, he keeps her safe by turning her from a threat to the Queen’s power, into a ruined woman who will never ascend the throne.

Now the Beast holds his princess captive in the woods, his focus on only one mission: deflower her and get her with child before the queen comes back to kill Justine herself.

He wasn’t expecting Justine to see past his terrifying form and straight into his heart. Setting her free is no more of an option than keeping her. But as their tentative alliance forms, both Victor and Justine can’t help but wonder— what if being together is their chance for true love?

"Beast," she said, trying to steady the tremble in her voice. "I have no quarrel with you, sir. Please don't hurt me."

To her surprise, the beast dropped down on all fours to be closer to her, and shook his massive head. A lock from his dark mane fell over his blue-gray eyes, and Justine paused. It made no sense for him to remind her of... Victor.

Maybe it was just that feeling they inspired in her that drew the comparison in her mind. That feeling she got when she stood on the edge of a cliff and stared down, and wondered what it would feel like to jump if only she had wings to keep her from crashing. Staring at the beast now, he felt like both the cliff... and the wings.

"I had no choice but to take you, Princess," he said, his voice gravelly and deep. "Do not run from me."

The cadence of his low voice sounded familiar, but that didn't make sense.

"You're not real," Justine said. "I fainted at my wedding and hit my head; I'm sure of it."

The beast loomed over her, covering her with his body, so there would be no escape. "I am real."

No. This wasn't real. "You are a figment of my imagination. There is no beast like you in nature. "

His face was millimeters from her own. He pressed his cheek to hers, his rough whiskers prickling her own delicate skin.

Goosebumps raised along her arms. If it were a dream, would she be feeling that?

"I am real," he growled. "But you are right about one thing, Princess. I am not natural."

"Please wake up," she shouted, hoping it would jolt her out of her nightmare.

With a dangerous smile that bared his fangs, the beast gripped her arm. "This is no dream. Shall I pinch you, and prove it?"

"Yes," she said, with a boldness she didn’t feel. This nightmare was going on too long—

The beast raised one thick eyebrow... though the eyebrow blended in on his face, which was covered in smooth short hairs that did nothing to hide his strong jaw and high cheekbones.

He picked her up off the ground, his large hands so human if not for the claws that adorned them. Yet they weren't paws. He definitely had fingers, holding her firmly under her buttocks. Each one sent a line of heat through her chilled flesh.

The claws that had torn her gown earlier didn't touch her now. Had he... retracted them? Like a cat?

With a groan that sounded too much like raw satisfaction for her sensibilities, he pinched a handful of the flesh on her bottom.

The jolt of pain made her yelp in surprise. *Pinches in a dream shouldn’t hurt.*

He dropped his mouth to her neck, his whiskers scratching her delicate skin, and nibbled her ear. It didn't hurt, despite his sharp fangs. He wasn't tasting her... he was toying with her.

His tongue was soft sandpaper against her fragile skin, like a cat tongue. It tickled and made her restless, unable to keep still his arms.

He pulled away from her ear to stare into her eyes. She couldn't look away as he growled softly and pinched each handful of her ass cheeks again, holding her flesh hostage even as she squirmed against him.

"Stop!" she gasped, struggling to be free of his iron grip.

Her attempts to move her bottom away from his hands only served to press her mound against torso. Quick as could be, the beast adjusted one hand to grab the junction of her thighs, forcing a moan from her mouth.

He knew her name. He used her name as if he knew *her.*

Reviewers have called Shoshanna’s writing “fast paced, intense, and sexual…every naughty fantasy come to life for the reader” with stories where “the plot is fresh and the pacing excellent, the emotions…real and poignant.”

Ms. Evers is also the cofounder of SelfPubBookCovers.com, the largest selection of instantly customizable, one-of-a-kind, premade book covers in the world.

Shoshanna used to work as a syndicated advice columnist and a registered nurse, but now she’s a full-time smut writer and a home-schooling mom. She lives in the mountains of north Idaho with her family and three big dogs, and loves to connect with readers on Twitter @ShoshannaEvers, and Facebook at www.facebook.com/shoshanna.evers

For more information on other books by Shoshanna, visit her official website: www.ShoshannaEvers.com