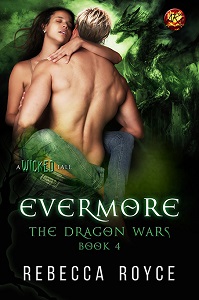 How is love possible when all is lost?

Werewolf Homer Prinze wants nothing more than to complete his assignment and get out of the wasteland that is the city. The dragons have destroyed everything, but a cry catches his attention. Before he knows it, he has met his mate. She needs his help and he is going to give it to her.

Camille is no one’s idea of great mate. Pregnant and alone, she is scarred and not looking for a companion in the hard world in which she lives.

But when Homer needs her, she will risk everything to bring him home.

Homer Prinze prowled through the crowd, counting the seconds until he could leave the putrid stink of the city. One year since the end of the Dragon Wars— the battle that had raged between werewolves and dragons for over seventeen years and caused nothing short of total destruction in the end—and the reconvening survivors of the war were arguably worse off than they’d been during the attacks. At least when they’d all been fighting a common enemy the werewolf population had been all on the same side. Post-war, the werewolf community all seemed to be turning their former dragon hatred on each other. They needed Alphas again. Pack life. A return to the thing which had at one time made them great.

How the wolves could find their way again was beyond his limited viewpoint. Homer had been a great secret soldier during the war and he was, he hoped, an excellent dominant pack mate since. Solving the world’s problems had to fall to someone else.

He couldn’t get home fast enough. His Alpha, who had once been his commander during the war, Robbie Owens, honored him with the task of negotiating supplies. He was cognizant of the recognition it brought him within the pack. Only he hated coming to the city every time. Gods, the smell. He shook his head. As soon as he returned home, he was shifting and running the last two days off.

Robbie usually handled the trips to the city himself. Entrusting Homer to make the run showed enormous confidence in him as a pack member, and Homer was not going to screw anything up.

If only all these lost souls could find the small beacon of happiness he had with his newly formed pack. He shook his head. The Owenses had been good to him, given him a chance first as a soldier and now as a valued member of their group.

A cry caught his attention and he turned toward the sound. Why the one noise called out to him when so many didn’t he had no idea. But the small feminine agony in the midst of all the rest of it trapped his attention and wouldn’t let him move another step.

The black market vendors he did business with were going to deliver the seeds to his hidden truck in two hours time. He had to see to whoever needed help. Waiting in the truck for his supplies to show up was out of the question.

The hidden Alpha in him wouldn’t let him do anything else.

Rebecca Royce is the mother of three and married to her best friend. Moving from the NYC area to Austin, Texas, she is trying to eat her way through Texas barbecue.

Anything can happen, believe that it will.

For more information on other books by Rebecca, visit her website: www.rebeccaroyce.com

2 ebooks- any ARe Imprint- winner’s choice