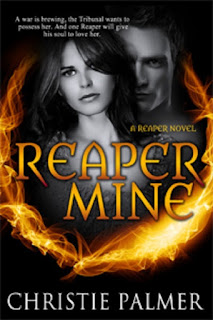 A war is brewing; the Tribunal wants to possess her. And one Reaper will give his soul to love her.

Now he only needs to can keep her alive long enough to find out who wants to kill her? And why the hell did the Tribunal want her so badly?

She was a demi-goddess. A cursed demi-goddess, who had accidently bound her soul to the Reaper over Violence in order to save her butt from a Freak trying to kill her in a graveyard.

Elle was having a really bad day.

He had almost lost her today and something deep in his chest had broken lose at the thought of losing her, and he just needed to feel her close to him. He would be damned straight to hell itself before he walked away from her right now.

So he kissed her, he wrapped his arms around her slippery body molding her against him under the pounding hot spray of water. Slanting her full lips over his, pressing them open he sank his tongue into her mouth to tangle with hers. She moaned into his mouth and wrapped her arms around his neck, making it easier to sink further into the kiss.

Victor lost himself in the kiss. The feel of the woman in her arms, full breasts pressed against him. And he grew light headed with desire; he broke the kiss to drag air into his starved lungs.

She tasted like warm sunshine, and the second he could breathe, he dipped his lips back to hers. Elle moaned into his mouth and Victor was lost, he thrust his tongue deep into her mouth, rubbing against her and drawing her tongue into his mouth he sucked on it. Drawing her unique taste and flavor into his mouth.

Memorizing her, gods he couldn’t get her taste deep enough into him. She made the most amazing sounds as he drifted from her mouth to the side of her neck. Elle burrowed into him resting her head against his chest, he thanked the gods he had left his boxer briefs on. As he tried to control the urge to press her against the shower wall and take her.

“Elle.” Her name came out more as a moan.

Christie was born and raised in a suburb of Salt Lake City, Ut. She lives less than a mile from the home she grew up in. World traveler she is not. But what she lacked in travel she more than made up for in her imagination. Within her vivid imagination she has traveled the world over as well as different worlds and different times.

She works a full time day job to pay the bills but looses herself in books and her writing whenever possible.

She is a loving mother of two wonderful children that she admits she is obsessed with. She has been married for 18 years to a very tolerant man that is grounded in reality in order for her to fly to the heights of her own imagination.

She started writing when she was a teenager after reading a book that she didn't like the ending too. Took a hiatus to raise her wonderful children but has dedicated herself to becoming a published writer for the last several years