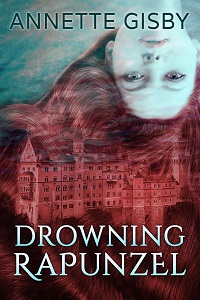 Recently released from a mental institution, Beth Gregory accepts a job as a live-in secretary/PA to the reclusive painter Josh Warrington. From the first moment he sees her, Beth’s long red hair fascinates him, and Josh wants her to be his Rapunzel for a series of fairy tale paintings on which he’s working.

He wished he'd thought of the water sooner. It was easier that way, not so much mess. It was peaceful too, watching her hair fan out behind her like a veil of gold. She didn't struggle after his hands were around her neck, and he was grateful. It showed him that she accepted her fate dutifully, like she should. She should never have made him wait so long.

Now he was waiting again, but he didn't mind. He was used to waiting now. Waiting could almost have been his middle name. Actually, it was Alphonse, but anyone who knew that was already dead, and so it didn't matter anymore.

It was a while since he had hunted like this, anticipated the inevitable. Usually he preferred the quick kill, where they didn't know he was coming until they started screaming. He liked to hear them scream. Made it all seem that bit much more worthwhile.

But there was something different about this one; something that made him want to wait, to delay the final moment, to make it last. He wanted to frighten her long before the end, when she would beg him to kill her. He couldn't quite tell what it was; there was just an air of something other about her. She wasn't like the other girls, and he grinned broadly. Of course she wasn't. She was special. But then, they were all special. They were his.

Maybe it was the hair which attracted him. It was long, tumbling in red-gold waves down her back, almost to her waist. It reminded him of golden syrup. He loved golden syrup, loved to eat it straight out of the tin with his fingers. No mother to nag him about that. Not any more. Fingers were fine, but sometimes he preferred bread, white bread, none of that wholemeal nonsense. He could almost taste it on his tongue, could almost taste her and he had to stifle a gasp at the image. No point in attracting undue attention to himself.

He glanced at the folder on the passenger seat, her name stark black against the buff-coloured folder. It had almost been too easy to get hold of her file, but no one knew what he wanted it for and he wasn't about to tell them either. He lifted it up and traced her name with a gloved finger, feeling almost as if he was caressing her already. This one would be so easy to break; she'd already been in a mental hospital once. He had to be careful; if she was sent back he couldn't get to her, not there with their high walls and staff on alert all the time. No, he just wanted to scare her for a while, but not inflict madness on her once more. He gasped as he saw her walking towards his parked car, her head down, her loose hair being buffeted by the spring wind.

Maybe it wasn't the hair; maybe it was the grey-green eyes which seemed to see right down to his soul.  Would she recoil in terror at what she saw there, or would she welcome it like the others before her? They had all welcomed him in the end. Or maybe it was the way she dressed, so unlike her contemporaries in their short skirts and skimpy tops. Any time he'd seen her, she was always covered up in long dresses and baggy sweaters, as if she didn't want to show off any of her womanly curves. She had curves, the clothes could not disguise them, and he had long imagined his hands roving over her delicate skin.

He also knew that underneath all those layers, there was a wanton harlot waiting for him to let her out, just like all the others. How they loved to tease and torment him. This time he would be the tormentor.

But not yet. He would wait. He was getting good at waiting.